Legendary US metalcore band, Killswitch Engage are set to release their sixth studio album in April and we got to check it out first. We can tell you one thing; this album was well worth the 4 year wait since the band’s most recent self-titled album. ‘Disarm The Descent’ is the more than triumphant return of original Killswitch Engage singer, Jesse Leach. After singing on the band’s first two albums and being replaced by Howard Jones for the past 9 years, Leach is back in ‘Disarm The Descent’ to deliver amazing lead vocals on an album that will resonate with any Killswitch Engage fan for years to come. 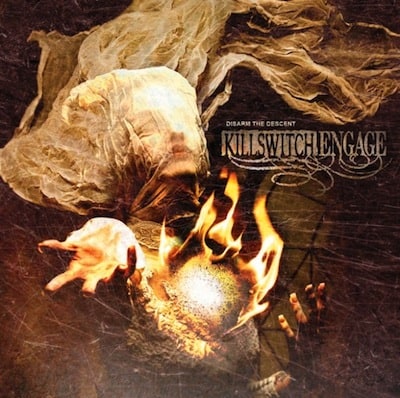 ‘Disarm The Descent’ starts with ‘The Hell In Me’, a powerful song to kick off the highly anticipated album. Right away we’re hit with the domineering vocals of Leach, pulling us in and captivating us for the next 11 songs. The album then goes onto ‘Beyond the Flames’, beginning with a staggering guitar intro from lead guitarist, Adam Dutkiewicz. The electrifying breakdowns in the songs throughout this album really caught our attention, going from a slow and rhythmic guitar and drum solo back into Leach’s dominating vocals. Rhythm guitarist, Joel Stroetzel, holds the songs together while Dutkiewicz delivers crushing solos and bassist Mike D’Antonio and drummer Justin Foley are the driving force behind the album with their dynamic drum and bass pushing each song forward.

As the album continues, ‘A Tribute To The Fallen’ is the perfect amount of contrast that we would expect from Killswitch Engage with a heavy theme throughout and beautiful and soft outro. This album is fast, unapologetic, and everything we could ever want from the band. The final song on the album, ‘Time Will Not Remain’ starts with a stunning guitar solo going into the perfect song to finish this compelling album. While the music behind the songs is what grabs your attention, the lyrics are what keep you listening. Killswitch Engage have always delivered lyrically potent songs, however this album seems to hold a particular message. ‘New Awakening’ is a brilliantly done song about living life to the fullest and not settling for what you’re given, sprinkled with energetic guitar riffs and Leach’s forceful vocals. Similarly, ‘No End In Sight’ is a song about perseverance with the music to back it up.

The whole album is something new and different from Killswitch Engage, but we love the sound. It’s a perfect combination of their earlier music featuring Leach and their more recent albums with Jones, all tied together with the usual Killswitch Engage, in-your-face attitude. This is the perfect example of the band’s progression and evolution which in this case results in something fantastic that any fan is sure to fall in love with.