Now then kiddiewinks and winkets let me spin you a yarn. Are we sitting comfortably? Good, pass me my pipe and slippers, and I’ll begin. Once upon a time (well, the summer of 2005 to be precise), our hero (yours truly – ‘cos I’m pretty damn heroic and you knows it) listened to A Wilhelm Scream’s ‘Ruiner’ for the very first time. The dizzying variety of musical influence and genres that went into creating that glorious schizoid punk mess nearly knocked me off my pogo stick. “That’s all well and good,” I hear you cry. “But what’s that got to do with the album you’re supposed to be reviewing you deranged Churchill Dog-alike moron?!” Well first off – Oi! That’s harsh, and secondly – Jeebus, hold onto your wellies, I’m getting to that. 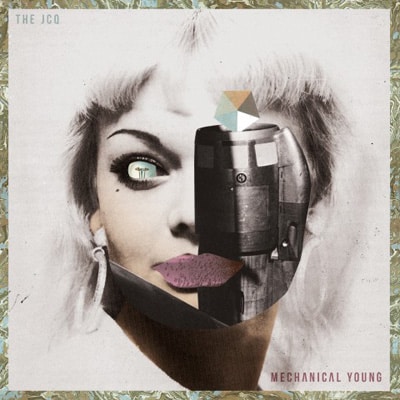 That’s right my little muffins, here we have the new album from the JCQ! No not the Joint Council for Qualifications you foolish wee beans – it’s the new moniker for the schiztastic James Cleaver Quintet, and the first thing that happened upon pressing play on ‘Mechanical Young’ was for my mind to shoot back to that first listen to A Wilhelm Scream’s minor masterpiece. For anyone who’s left cold by that rather reductive description, think Rolo Tomassi, playing tiddlywinks with Pulled Apart By Horses, while a drunk jazz fusion group keeps score. The drums are always a-gallop, the guitars so off-kilter it could offend a traditional Scottish dress shop, but with this new album the foot has been slammed onto the accelerator.

Frontman, Jack Swagger (yes, seriously – and anyone who doesn’t know why that’s amusing is a better person than I – you’re better off not knowing [it’s a wrestling reference, dudes -ed]), manages something that many of the other schizo-punk-style bands don’t seem to be able to with any great conviction, he holds the entire album together with a silky smooth vocal that’s as comfortable with a melody as it is with an aggressive yowl. ‘Aspidistra’ is a haunting and easy-listen, ‘Love’s No Good’ could be at home on a dance playlist, while the syth-happy album opener ‘Ghosts Diffuse’ let’s Jack scream at us like we’ve just written a rude word on the wall with our crayons.

Few bands can do diversity like this and still have bags of charm oozing through the seamless amalgamation of styles and sounds. So listen to your Uncy Soundsphere magazine and go and check these bonkers Brits out, they won’t disappoint.

And perhaps most importantly – when I wrote “wellies” in the first paragraph, it autocorrected to “willies” – heh heh.