Explosives For Her Majesty – ‘Some Kind Of Familiar’

Decidedly done with a dormant five years, Explosives For Her Majesty return, like their name sake, with a bang with new album ‘Some Kind Of Familiar’, boasting a brand new line up looking to make a stand in the music industry entity renowned for its perpetual evolution. Just as the title suggests reoccurring themes can be traced back to their debut album ‘Slogan Formula’ but new members and distinct melodies that can only aptly be described as studio experimentation ensures an unparalleled sound that stands out even within the confines of its own genre. 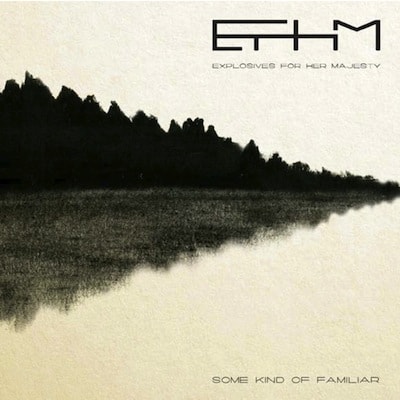 This industrial rock brain-child stems all power from the commanding guidance of composer-producer Kallie Marie. Although they haven’t gone live as of yet, the band eventually hope to cast off from the relative safety of a studio project and fight to secure their place in the idolising eyes of many an alternative fan. Continuing to churn out fresh, uniquely genre ambiguous material Explosives For Her Majesty should have little trouble undercutting the current favourites so long as this new found direction, borne of learning from previous mistakes, continues to unfold in an enticingly interesting fashion.

The band burst across the sound wave ether like Marilyn Manson riding Depeche mode into a whole new amelioration of industrial dance-rock, heavier and more back beat dance genre than these two possible influences, comparable to such revered heroes of old but never rivalled in its stand-alone modernised mash-up. The encompassing vibe of ‘Some Kind Of Familiar’ is a definite improvement on the band’s debut release. This time around a major step up in vocal talents, courtesy of Dan Adams, lends a concrete stronghold in the wonderfully abstract electro-industrial rhythms, something for listeners to root themselves to as technical experimentation and studio effects swirl lovingly around the perfectly suiting singing.

The songs on this four track album vary subtly whilst adhering to the same overall alternative industrial cross feeling. The first song ‘Preaching To The Rails’ demonstrates the bands ability to forge dancelike melodies, combining a poppy repetitive drum beat which gives something to move to with a chorus that sticks in the forefront of your mind and can be found ever rolling, unintentionally off the tongue with strong if a little strange lyrics. Here we can see they’ve not run wild effects wise, thankfully this separates it from the overly produced first album but does nothing to dampen the tunes vibe whatsoever. A mid-song break down prevents monotony and overlapping vocals add uniqueness and an alternative sound. Vocal dynamics alter frequently helping to create a distinct difference between the “get up and move” chorus and ever expectant verses that build suspense perfectly culminating in the euphoric climax of such a catchy chorus.

After peeling yourself off the walls after such a body pumping track the next song ‘Gemini Rising’ fades somewhat and provides a different aspect of Explosives for Her Majesty’s impressive repertoire of musical genius. Relaxing, slower drum beats intertwine with strong but not dominating lyrics for a real sway in the groove song displaying less of a dance-rock feel and sounding more like an industrial ballad. This and a powerful chorus combine into something that may not necessarily have you pulsing with the bass kicks but will definitely see you swirling with the heartbeat of a song riddled and inset with deeply profound emotion. A little more digital manipulation works here but effects added to the vocals don’t go too far and add a depth to the song especially in the slowdown period towards the end that builds back up to a dramatically startling ending.

Overall Explosives For Her Majesty’s ‘Some Kind of Familiar’ functions excellently as pre-craziness chill-out solution, more edgy than a Sunday wind down but with just enough rock-pop subtext to hype up the subconscious ready for a serious party Saturday night.