By Adam Smith April 14, 2015 Live, Reviews
No Comments
Four Year Strong have had a turbulent few years after breaking out in 2008 with their (then-unique) blend of catchy pop-punk and thunderous breakdowns. 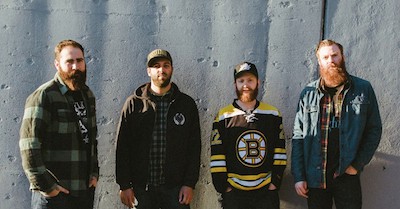 One lost member, a “mature” third album and an online backlash later, FYS are back in Leeds armed with a stunning new EP and the future looks bright. Before the pop-punkers head on stage, young upstarts Forever Came Calling warm up the crowd with some slices of up-tempo summer anthems. ‘Contender’ and ‘Front Porch Sunrise’ are as good as anything in the scene right now and while they admit this is a jet-lagged set, you certainly would not know it.
Much like FYS, Hit The Lights are hoping to re-establish themselves after 2012’s ‘Invicta’ alienated their fanbase. Unsurprisingly, we hear a lot of material from their first two albums, played with the same energy that made the Ohio group so successful in the last decade.  Their new songs sound like the band have their mojo back, too.
However, the band’s age clearly shows tonight, as many members of the crowd simply do not know the material. It’s a shame because they are truly on form. When ‘Bodybag’ hits, the crowd finally erupts. It’s a great set wasted on an indifferent crowd.
Thankfully, those in attendance come to life for Four Year Strong, with bodies flying around the room as soon as the opening chords of ‘What’s In The Box?” hit. The rest of the set follows in the same vein as we see the same kind of euphoria witnessed during the band’s first run of UK shows back in 2008.
With most of the set coming from the group’s first two albums and their latest EP, the sing-alongs never end and the breakdowns pack more punch than ever before. ‘What The Hell Is A Gigawatt?’ sparks circle pits galore and ‘Heroes Get Remembered, Legends Never Die’ causes all of the room to sing their lungs out.
‘Wasting Time (Eternal Summer)’ wraps things up in style and reminds everyone in attendance that FYS are well and truly back.