Humber Street: it’s a place we know well. The street that was once merely a ramshackle fruit market falling at the seams has seen a sudden, meteoric rise to becoming the epicentre of Hull’s distinctive artistic and cultural identity. But for one day, it was not just a street – it was a venue; descending upon the Humber were the musical powerhouses of the Northern collective: storming no less than 20 stages ‘til the sun sets, we were in for something unforgettable. 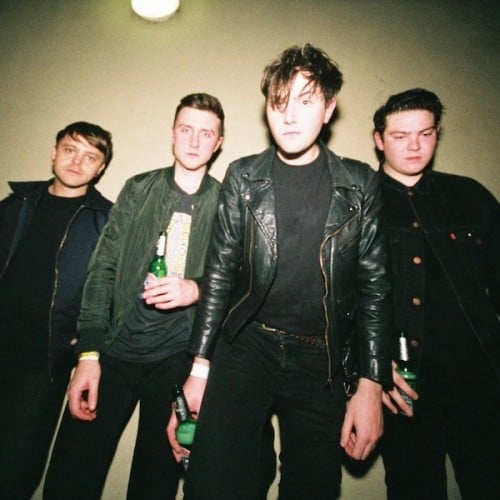 When the people came, they came in droves. It seemed as if the people of Hull were carried along by the intensity of the same current: teenagers, families, children – every creed and culture – were in swarms gravitating towards a hive of live music, good drinks, good food and good times that seemed to carry on the air. There was not a better day for it. The sun spilt its warmth upon us and cast the day with a radiance that, with the energy of the crowds – the sunglasses, smiles, scents and sounds – vowed to make 2017 the greatest Humber Street Sesh yet.

Taking to the BBC Introducing Stage, carefully hand-picked and primed by none other than DJ Alan Raw, were the celestial four-piece LUUNA. Still only in their infancy as a band, LUUNA has proven themselves to be the crème de la crème of their scene, with their first EP Moonflower garnering fervent critical acclaim at BBC Radio 1, Amazing Radio and of course, BBC Introducing. To define LUUNA would to be to defy the very essence of the band: the fluidity of their sound and the ethereal nature of their performance eludes categorisation. Having sonically distinguished themselves with their understated, muted instrumentals that melt so irresistibly with the hauntingly wistful, almost yearning vocals of singer, Yoshika, this band are pastel-kissed and make an entrancing performance. Discovering talent that may otherwise have escaped your attention is perhaps one of the greatest elements Humber Street Sesh has to offer: it’s not all about the big-print bands.

Weaving your way through the streets, you’d find there’s far more than just music kicking off at the Sesh. Scattered across the venue were outdoor food stalls – but of course, Hull, meriting its title of City of Culture, not only offered your traditional festival bites, but branched out to encompass Indian and Caribbean street foods that drifted on the air pulling you in all directions. How could I forget to mention the chip spice? An adopted delicacy, Hull has made chip spice a hallmark of the city – and absolute must for any visitor. Let me tell you: it doesn’t get any better than Humber Street’s Thieving Harry’s. And if you were fortunate to catch wind of it, or stumble across it by coincidence, the Brewery Wharf Bar had headliners LIFE’s very own, brewed-in-Hull beer, Hopular Music. Good food and good booze – what else could you possibly want?

Taking a walk past the Dead Bod stage – named after Hull’s greatest accident of public art exhibited in the Humber Street Gallery – we went to the Everyone Back to Ours stage, where we were graced with Edinburgh-hailing band, Indigo Velvet. This band were an absolute delight: let me say that before I say anymore. An unsigned band, with 9 to 5 jobs in a department store, Indigo Velvet encapsulate the DIY spirit, creating their own success as they go, having been commended by countless radio shows and publications, including having played T in The Park only the previous year. An irresistible blend of twinkling, smile-inducing instrumentals that lend from indie sensibilities, all the while introducing a fantastic tropical tang all of their own, Indigo Velvet are now my go-to feel-good band. Everything, from the vocalist’s pink Doc Martens to the warm, friendly attitude and the crowd chanting to their music, was the essence of summer itself. I dare you to find a band that not only have an incandescent string of songs under their belts, but also seem to emante that same effortless inner radiance themselves. You won’t be able to see this band without a dumb smile on your face.

Hull would be doing its title a disservice if it didn’t showcase the city’s artistry. Hidden in plain sight was a selection of Hull’s finest music photography along the pier, as well as exhibiting their very own Mr Joe Johnson’s sweeping, psychedelic murals across the venue to give the Sesh another splash of individuality and vivacity. But Hull, in the same way it treats its music, has enough room for not only the established, but the aspiring: pieces produced by the city’s art students were also showcased alongside recognised artists. The ubiquity of the music and the art – everything that comprises of Hull’s identity – encapsulated within a few streets was almost overwhelming, but with that came a pride that you can call this your home: that these people are your people and these places are the places you know so well.

Taking to the main stage, overlooking the marina itself as the sun bled over Humber Street, was King No-One. After a day of exploration of hidden gems in the northern crown, the main stage was bringing to us their top-billed bands. King No-One is a carefully honed, beautifully coordinated four-piece: the way they exuded a fluent, effortless confidence on stage that seemed innate, which, when coupled with their theatrical indie rock reminiscent of The Killers, made them unforgettable. The magic that this band seem to possess, along with their breezy shirts, painted faces and the impish self-assurance of the frontman, Zach Lount, brought to mind Neverland’s lost boys all grown up. King No-One had the audience in the palm of their hand, as Lount leapt over the barrier and climbed the railings. Favourites such as their singles Antichrist and Alcatraz, with their suave instrumentals and anthemic choruses, had the crowd enamoured with them. They knew what a show was, and hell, they brought it to us.

Throughout the night at the main stage there was an unspoken, barely susceptible tension in the air. With every act as the night drew on, as the luminescence from Debi Keable’s neon light installations came into their own, the energy intensifying seemed to be in anticipation for the headlining act: LIFE. Let me tell you, LIFE is a rare breed: some may say a band of this calibre are extinct, that our local scenes are dead, and that the community buried their bands along with it. Yet, LIFE is that particular creature that is the living proof of an act we thought we’d never see again: a people’s band. There is a fever; an unrestrained wildfire that is catching frenetically across the nation – and Hull is the epicentre.

LIFE is a brewed-in-Hull set of four, and in the musical spheres of the city seem not only to be a part of Hull, but have become it. In the material that makes up the City of Culture, you will find LIFE is a large part of that tapestry. People come out in droves to see them perform, a network of dedicated followers who show their faces at every gig, regardless of size or scale. I neglect to use the word “fan” when describing these people, as their idolisation of LIFE is not from afar; not divided by hurdles of barriers, security and the musical elite. LIFE are loved not only for their music, but because the people of Hull know LIFE. Mez, Loz, Mick and Stew make a point of not being untouchable, musical messiahs – they are people, just the same as the crowd, and it is that which forms the foundation for their particular brand of magic.

LIFE jumped straight into it, and with them came the crowd. Their high-octane performance delivered with a punk velocity whipped up a storm in the crowd – never were they more alive until LIFE’s performance. Mez Green’s vocals seemed to have two hands to take all they could: on the one hand there was his sneering, theatrical tone to lure them in, but on the other it became untamed and charged with all the fury a call to action like their music takes – and it was that which kept us gripped. As well as performing classics from their debut album Popular Music – including the lesser played Beautifully Skint, which is to me one of the most anthemic of their songs – LIFE also introduced new material, including single Hollow Thing. As a surprise element of the night, LIFE filmed the music video for Earthworm during their performance, with incredible shots of Mez plunging into the pit, swarmed by the electrified crowd.

It was a fantastic way to close the night, and as the people slowly trickled away from Humber Street, leaving in their wake cups, cans and bottles, and dizzy smiles, everyone knew this year’s Humber Street Sesh had been a good one.