Knebworth house has been running as a legendary live music venue since 1974 when The Allman Brothers first welcomed thousands of people through the gates. It seems fitting that forty years on the venue is still home to a vast array of astounding live music acts – on this (mostly) sunny weekend, 50,000 rock and metal fans arrived to pay homage to the gods and greats of rock at Sonisphere Festival. With a cancelled festival last year, Sonisphere upped its game with a lineup to rival any other rock metal festival on this years’ circuit. 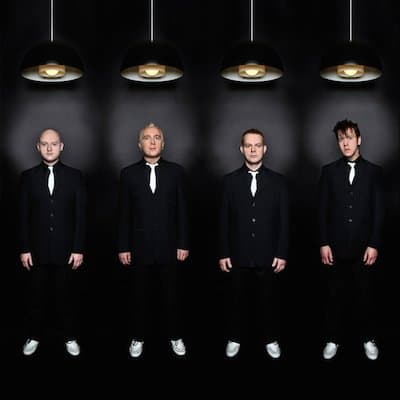 There’s a little something, something about Sonisphere: maybe it lies in the Knebworth heritage, maybe it’s in the great layout and attention to detail, maybe it’s the fabulous array of gourmet food on offer and unique little retail outlets: oak smoked salmon for breakfast, a bit of reiki massage provided by Namaste in the Healing area accompanied with a strong Motley Brew anyone?! Despite welcoming 50,000 it feels like a much smaller festival with a personal touch, throw into the mix that the two main stages alternate so that you never miss an act and you’ve got a winner of a festival.

The Derbyshire trio Lostalone burst onto the Bohemia Stage early on in the day, begging the question of why they’ve been around since 2005 yet they’re still a relative unknown. They played a short but fast paced show, Guitarist and vocalist Jason Danzelman creates an all-eyes-on-me effect as he pounds the stage riff-tastically offering the frontman dream. A band full of speed-metal spirit, their defining mix of nu-glam has the small but energetic crowd bouncing and singing their hearts out, especially to the anthemic Dooooooooomageddon. Keep an eye on these guys, their time is yet to come.

Fred Durst may be one of the more hated frontmen in rock, you can’t fault the Limp Bizkit style. A mini appearance by the Lounge Kittens for opener Rollin’ helps to line up the back-to-back explosive set of the Best of Bizkit. Fred urges the crowd to “calm it down” before riling them into a frenzy. Painted guitar hero Wes Borland forever gains favour where Fred loses it, phenomenally delivering on the classics ‘My Generation’, ‘Break Stuff, ‘Nookie’ and a cover of Rage Against The Machine’s ‘Killing In The Name Of’. A nostalgic set designed to get the crowd primed for The Prodigy – it does exactly that.

Your heart tends to sink a little when you hear the closed-minded comments whilst watching The Prodigy (featured picture) – yes, this is a rock and metal festival and they aren’t strictly metal but neither are Chas and Dave and they seem to get a darned good reception! Sonisphere is a festival for good music and exceptional live acts and The Prodigy ticks both of those boxes. Keith Flint is ever the well-preserved frontman, infectious with energy and a light show to boot – they belt through a twenty song set made to please – ‘Omen’, ‘Firestarter’, ‘Breathe’ and ‘Smack my Bitch Up’ all whip the arena attendees into proving their best dance moves. A set of old and new, MC Maxim and guitarist Rob Holliday effortlessly blend their skills to provide a smooth yet unrelenting set to a laser show of epic proportions.

An all-American super group featuring Richie Kotzen, Mike Portnoy and Billy Sheehan is obviously a must see for a Sonisphere Saturday – The Winery Dogs’ first festival appearance stands solidly as a favourite despite being on a stage for much heavier acts that day. Grinding up a blend of bluesy rock and roll they offer a chilled vibe as Richie Kotzen’s eyes glaze over prog-rock style as he gives vocally from his depths while esteemed drummer and co-founder of Dream Theater, Mike Portnoy pounds the kit as only he does, streamlined with ease and an unforced yet very powerful grace. It’s a sound very different to the individual member’s previous projects but a very much welcomed one.

One of York’s best, Glamour Of The Kill are fast becoming Sonisphere veterans as they take to this years’ Jagermeister stage. They are ripped, pumped and look like an Avenged Sevenfold tribute band but you can’t help feeling privy to a secret when watching them, why? Whilst once easily comparable to a Bullet For My Valentine tribute they are starting to grow into adults and find their own groove on stage. Their cocksure attitude, riff-roaring guitar skills backed with killer harmonies and a visual that is easy on the eye all command attention as they throttle through a tight set pulling from both studio releases with ‘Supremacy’, ‘Second Chance’ and ‘Break’ all riling the crowd into a frenzy.

Eureka Machines are a pop-punk band that always deliver and this was another chance for them to showcase. Like a well-oiled time piece, they give a set which is seamless, consistent and their charisma ever a commitment. The charmster Chris Catalyst banters genially with the familiar faces of their front-row fans while they boom through a set of sing along missives and happy harmonies. If you’ve still not discovered how to ‘Scream Eureka’ we highly recommend you get on it.

Reel Big Fish may have been dogged by sound issues but they can’t be faulted for deciding to play on regardless while the sound dropped out for them mid set as they, perhaps ironically played, ‘Where Have You Gone’? After all, with strict stage times to adhere to and a frankly fun and bouncy set to make their way through why would they stop? The bemused crowd watched on and waited for the moment that their noise erupted through the arena for a bounding rendition of ‘Beer’ and a cover of Aha’s ‘Take On Me’. Ever endearing as a band, these guys and their sense of fun is contagious even the most hardened of Sonisphere rockers had their feet tapping.

Something we didn’t think we’d see the day of is watching Irish alternate rockers Kerbdog reform and play a live set comprising of the best of their highly under-rated ‘On The Turn’ album. Frontman Corman Battle had reflected that they were just underappreciated in their time and that the album seemed to gather more attention now than it did back in 1996 – it has some merit, recorded at the famous Sound City Studios where greats like Nirvana and Tom Petty laid down albums in anologue stylings yet for some reason was lost among the Brit-Pop sensations towards the end of the 90s. Kerbdog fans rallied for the original lineup on the stage of Bohemia at Soni. Cormac’s distinctive heavy yet poppy vocal sound almost blurred out with the efforts of the crowd hurling their hearts through their throats for On The Turn, Sally and JJ’s Song. Grungy and nostalgia-filled, we just hope it sets the scene for some new material.

Following on from their Glastonbury set a week earlier, Metallica headlined Sonisphere to a crowd of over 40,000, the set-list is refreshed and we assumed that the crowd in attendance would be a bit more supportive of their appearance. Playing in a “by request” format, this is a festival slot for the fans with each song chosen prior to the show by the ticket-buyers – one might hope that a request only show might mean a showcasing of the obscure but for Sonisphere it means a blasting through the best of. Never mind though because they pound through their two hour set for their “Metallica family” as only Metallica know how – with unbridled musical skill and seemingly effortless delivery. They might be clocking in the years but they still play as ever they did, highly talented and exceptionally engaging. Thanks for having us, Soni! See you next time?