While Irish grunge outfit Kerbdog reissue their self-titled debut record and its cult classic follow-up On the Turn in time for Christmas, now is as good a time as any for frontman, Cormac Battle, to sit down with his former self. “You do get a bit wiser as you get older,” he says. “If I’d have put in the effort that I put into the work I do now into Kerbdog, things might have been different. It’s a regret I have, but nevertheless, things happen for a reason.” 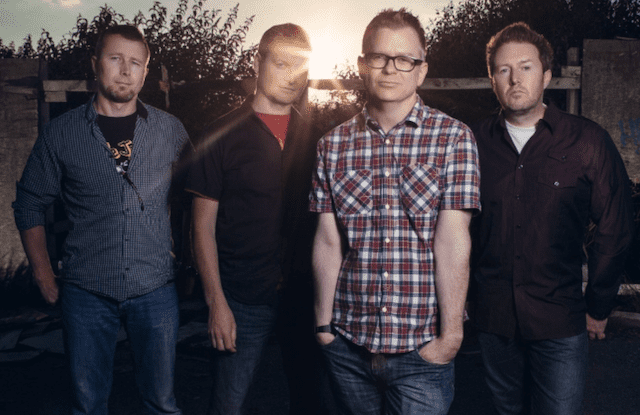 Kerbdog, a band hailing from Kilkenny – a relatively unknown part of the world – had inadvertently tapped into the zeitgeist of the 90s, where the guitars rained like hellfire and the lyrics stung with newfound vulnerability. Their rise was short and sharp, leaving two records in their wake which have been loved fiercely ever since. While Battle and drummer Darragh Butler went on to form the band Wilt, and Kerbdog have emerged for sporadic one-off performances through the years, ultimately, they have let the band remain what it truly was: a record of the day.

But Battle has remained in the orbit of music, even if he is not an active musician anymore. As a presenter of Ireland’s RTÉ 2fm alternative music programme, The Battle Axe, he is passing the baton to the bands who will go on to define this generation. It’s a strange switch of roles, Battle knows. “I’ve played in toilets, I’ve slept in the shittiest places you could ever sleep – from the best to the worst, really – I’ve had those experiences. I felt like I could talk to bands with an authenticity that maybe other DJs couldn’t, because they’d never seen things from the unique point of view of being in a band.”

He remembers thinking, when he was on the other side of the desk, “’God, I’m in one band, and we could implode at any second – you’re on the other side, and you have bands trotting through here every week.’” He admits being in a band means you live in a world that though brilliant, is fraught with insecurity. “I always craved a sense of security that being a musician could never afford me.”

One of the most interesting aspects of the transition is that when once, Battle was sending his demos to radio stations only for them to be indulged for twenty seconds and then cast aside into a bin bag, now, he’s the one who decides what makes the cut. But with the unusual experience of both sides of the coin, Battle males a point of listening to everything he is sent. “I remember sitting in our bass players kitchen, putting demo tapes into envelopes and sending them off to record labels all around the world, and I’d be devastated to think some guy just threw it to the side and didn’t at least give it a listen. “Even though 90% of it will be shite, I’ll still listen to it anyway, because I feel duty-bound to do so. If someone hadn’t done that for me, I wouldn’t have had a chance, you know?”

The far-off notion of ‘making it’ can feel like a lottery, Battle admits, but “if there’s something really good, it does get found out.” While one person might miss it, he is confident that these things have a way of taking care of themselves. “I know so many emails you sent will go unanswered, but I will generally answer somebody if they directly contact me with my name. Even if I know it’s going nowhere, I’ll say something encouraging back: even though it’s not the right fit for us, I’ll redirect them to someone who can help them out. There’s only so much you can do, but if someone didn’t do the same for me, I wouldn’t be speaking to you now.”

While some struggles remain the same, the landscape of the music industry since Kerbdog’s heyday has changed irrevocably – more so than ever in the face of the Covid-19 pandemic. “The only way bands really earn a living is by playing live, and if you can’t play live, you can’t make a living from it,” Battle says. “It’s a double-edged sword, because if they release something, they can’t go out and promote it; if they don’t release something, people will forget about you. But people are putting out records for their own sanity, as if to say, ‘Hey, don’t forget – we haven’t given up.’”

The entire infrastructure of the music business has changed, and monetisation is far more complicated. Now, releasing their vinyl reissues is “a labour of love – they’re artefacts,” Battle insists. “I have no skin in this. We’re not selling 55 million copies of these things. As the guy at our label said, ‘No one’s going to be building swimming pools off this, lads!’”

Before digitalisation where Spotify and Apple Music became streaming titans and the history of music was at our fingertips, record companies were making CDs for a penny and selling them for £10. “They were drowning in money, which meant they could afford to write blank cheques for young bands like us who signed to their labels,” Battle explains. It meant, for Kerbdog and bands of their era, that they could fly out to LA to record On the Turn, stay in luxury apartments and have the very best equipment and team money could buy. “We had the time of our lives!” But Battle acknowledges, “I think that’s an unimaginable prospect for bands these days. Without a physical format, the money simply isn’t there anymore. But you have to keep going – we all do.”

It was an opportunity that was passing him by without him even realising it. “We were very, very young, naïve, wide-eyed and completely ignorant of the world in which we were immersing ourselves,” Battle says. “Throughout the time we were active as a band, we didn’t take it seriously. We laughed at ourselves a lot – we’d thought we’d won the lottery. We thought, ‘How did four guys from the south of Ireland end up getting signed to a major label in the UK, rubbing shoulders with all these people?’ We just felt like imposters.”

When it comes to advice, he would give his former self a lot. “I would have said – and I know this might take the magic out of it – to treat it like a job, in some respects. A lot of the time, we were really fucking lazy, you know? We were totally oblivious to any decisions being made about us. We used to go the studio and sit there all day, drinking tea, and that would cost £300 a day, and we’d be there for a week, and all we’d have done is written half a song, drank 500 cups of tea, and say, ‘Fantastic, job done!’ But I’d like to have somebody had told me to work a lot harder on what you do, because most of your friends are working really hard at shitty jobs, and you should appreciate that fact and work as hard as they are.”

Kerbdog’s lax attitude caught up with them, in the end. After On the Turn failed to blossom, the band were dropped and reality hit them – hard. “I felt, in my heart, like a complete failure: myself, as a person, for the project of being in a band. Everything,” Battle confesses. But he decided to reframe his thinking: “Someone could look at me, at 25, and say, ‘Man, you’ve just had the time of your life! You’ve been all over the world, which you’ve never paid a penny for and put out two great records – hardly anyone gets to have that kind of experience in their entire life. That, to me, sounds like the definition of success.”

But now, all these years later, through hard-won experience Cormac Battle has learned to focus on what really matters. “Success, to me, is about your relationship with the world and the people around you. Your friends and family are the most valuable things you’ve got in your life, because everything else can fall away, but they can still be there for you. I think you can be successful without having anything in your life. Look at all the people who have more money than you can shake a stick at, yet they’re still deeply unhappy. I think people could do themselves a favour,” Battle says. “Redefine success for yourself, and make it meaningful.”