In our latest interview we had the chance to speak with Failure’s Ken Andrews about the band’s reunion, the evolution of Failure and plans for the future. 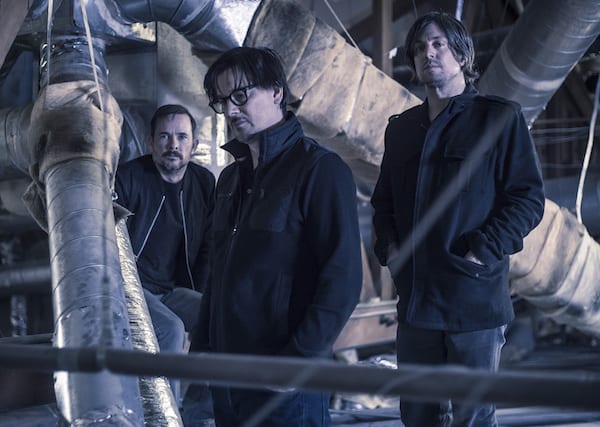 S] Thanks for taking the time to talk to us. How are you looking forward to your London gig?

K] “We’re really looking forward to it, we had a really good time when we were here in May.”

S] You’ve done a couple dates in London. Do you have any plans to do a UK wide tour?

K] “I don’t think so, even just the show that’s tomorrow, it was kind of last minute.”

S] You’ve had a lot of fan support for Failure’s latest album, The Heart is a Monster. How was it to build that album after so many years with so much support from your fans?

K] “We were very surprised. We really didn’t know anything was going to happen like that until we played that first show in Los Angeles back in 2014. We could see by the makeup of the crowd that it was a combination of older people from the 90s that probably bought our albums back then, but also half the crowd was in their twenties, which was very surprising to us, so that was the moment where we were like, we actually have a new fan base that might be kind of fun to explore.”

S] You’ve adapted to the changes in the industry of putting out a record. What inspires you guys now in relation to putting out records back in the day, in the early 90s? Are the inspirations still the same?

K] “With the business side of it, there are two sides of the coin. It’s nicer now because as a band you can be more in control of what you do and when you put out your music, how much you put out and, creatively, what it’s like. You’re in more control so that part’s good. The bad part is that you don’t have the support of a big company spending money and giving you tour support and promoting you. For us specifically we find it to be a lot less stressful because we didn’t have the greatest time with our record label back in the 90s. We had problems and disagreements and all sorts of bizarre business stuff going on with the label that had nothing to do with us, but it affected us greatly. Now that that stuff is gone and we’re really only working with companies to help us distribute the music, it’s just much simpler. There’s less conflict so that’s very nice, we like that.”

S] How do you feel like you’ve changed and developed over the years through making Comfort with Failure back in the early 90s to now with The Heart is a Monster?

K] “I’ve changed massively since that first Failure record. When I’m making a Failure record I still want to retain the identity of the band, but the tools that I have in terms of what I’ve learned in the past twenty-five years is just a whole different thing. When we made Comfort it was our first band. We’d played eighteen or nineteen shows and we’d never recorded before. We were very nervous and didn’t know what to expect, we really didn’t know what we were doing. Just as musicians we were still getting our footing. Myself as a singer, I was very shy and not confident and I wanted the vocals to be as quiet as possible on the record. Compared to now, I’ve made quite a few records as an artist and even more as a producer or mixer and it’s a completely different thing. I have a lot more confidence and a lot more knowledge about the whole process and it’s more fun. We can get down to the business of writing and coming up with things that we like much quicker now than we could back in the day, it was a bit more of a struggle business wise and ability wise as a band. The other thing that’s really changed is the understanding of the band. In the 90s people were always hoping to describe us and figure out which bands we sounded like, which is a problem that every new band faces. Now we’re not being compared to other bands so much as the albums and the music that we’re making now being compared to ourselves. That’s nice as well, to be understood better.”

S] Can you tell me about your favourite moments from recording the new record?

K] “I had this overwhelming feeling that I really liked what we were doing and I wasn’t sure what it was going to be and wasn’t sure if we were going to be able to come up with something that we both thought was Failure and also good. I would say towards the end of ‘Come Crashing’, which is the first thing that we did, I went to bed and I just couldn’t sleep because I was so excited about the possibility of actually making music like that again, it was big surprise for me.”

S] How do you look back on the success of those moments in your career, from that period of time when you started in relation to now and having left a legacy by influencing so many bands?

K] “The fact that Fantastic Planet is still finding fans fifteen years later is really quite flattering because, as we all know, music definitely goes through a lot of changes over time and genres and sounds morph and change over time so to have something that old still have some sort of viability for people now, it’s really flattering. I have to say back then when we were doing it, it was a good time and we were very focused and we threw everything we had into it. We made the album in a very immersive way, we lived in the studio essentially and did the music twenty-four seven, but the business side of it, bringing it to the market was basically fraught with disappointment and confusion. There was a feeling that we were doing something very cool and there was some excitement, I don’t want to paint a completely bleak picture, but at the same time there was a feeling of missing something. We didn’t get swept up in the whole grunge thing. We were a little bit of a misfit band at the time. Although we did have fans, it was always a bit like we’d done some of our best work and we felt like the work that we were doing was important, but it wasn’t always accepted that way so it was kind of disappointing sometimes.”

K] “I think 2016 for Failure is going to be mostly festivals and I’m sure we’ll be back here to Europe.  I know we’re doing Australia in January. We’ve toured the US quite a bit over the last six months so I’m not sure how much of that we’ll be doing. We’re kind of mixing the one off festival thing with writing. When I say writing it’s more like cataloguing ideas. It’s very rough, basically storing up riffs and little small ideas that will eventually become the kind of blueprint for the next full length album.”