First bursting onto the scene guns a-blazing in 2014, Saint Agnes have since cemented themselves solidly into the music industry as a band that commands your attention, in a heady shot of rock tinged with punk spirit that has earned them the label of ‘Britain’s most exciting live band.’ Hailing from East London’s industrial area Silvertown, the four-piece introduce their lawless world to audiences through visceral, hard-hitting anthems that belong in packed-out arenas, with powerhouse Kitty A. Austen fronting the operation. Ahead of the release of mini-album ‘Vampire’ (set for release March 2021), India sat down with Kitty and co-founder of the band, Jon James Tufnell, to discuss all things Saint Agnes after a year that brought the music industry to a standstill, but has perhaps made this band even more determined to push through. 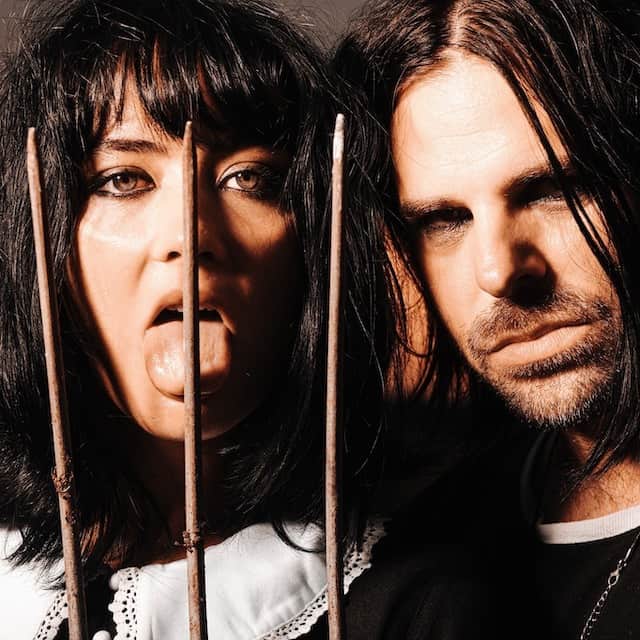 ‘For us, it was going to be a really big year in terms of live playing,’ Jon stated when considering 2020’s impact on them in particular. ‘We were just going to take a bit of a step up in terms of the size of the places we were playing and the kind of festivals that we were doing, and be able to present ourselves in a way that we were much happier with, so upping the production – all that kind of stuff – we were looking forward to getting to be what we imagined we could be and what we’ve tried to create on smaller stages, so it’s been really frustrating to not have that, when we had such a strong vision for it.’

As for Kitty, the live connection is also an integral part of her experience: ‘I’ve been in bands since I was a kid. My brother plays drums, so we grew up playing in bands together, and this is the longest I’ve been without a gig to rehearse for since I was like 12 years old,’ she remarked. ‘Because I’ve never been without it, I didn’t realise how important band life is in keeping my brain happy and balanced. I really need it in my life – playing music with my mates, hanging out, rehearsing, touring, being involved in the music community, for my mental health. It’s been a rough year! It’s always been a driving force, but I didn’t realise before quite how much I get out of it.’

Further adding to the sense of catharsis that comes with performing live, Jon explained that ‘the mental release and the sense of camaraderie and the connection with the audience and to something that’s bigger than yourself is so magical and empowering, and just so powerful that without it, you realise that life lacks clarity and colour. We need those shows, we need to play live, because without them there’s some kind of mental difficulties that arise. You realise that all of those positives solve problems in your mind; they’re like a mental reset button that you get to press with every gig, and I feel like we are going slowly mad!’

The ordeal that was the past year was discussed at some length, Jon remarking that ‘the biggest lesson of all is how to not take for granted what you had.’ As a self-professed ‘live-first’ band, Saint Agnes have unsurprisingly found this year limiting. Fans of the band will readily tell you that after even just a single listen of one of their tracks, anyone would be able to confirm that their sound is ‘stadium-ready;’ it’s loud, heavy, greatly helped by a bigger venue to allow it to breathe. As fanbases go, Saint Agnes’ fans are a loyal lot, having been a huge part of the band’s journey.

‘We’ve really shared the journey with our fans and we’ve tried to involve them as much as possible through the whole process of the band, and we really value the relationship we have with them, and I know from speaking to lots of people that they’re gutted for us,’ Jon shared. ‘It’s really quite heartwarming to see how much people really value what we do.’

Though 2020 was a tough year, it appears that this band’s sense of motivation remains unshakeable: ‘we would have never have done all the cover songs that we did during the summer which taught us a lot about our sound and ourselves and about what we wanted to do next, and the ‘Vampire’ mini-album that’s coming up would not have been written or recorded in the way it was. We’re really happy with what we’ve created, we really feel that it represents what we are right now, and the limitations put on us – rather than be annoyed at them and use them as an excuse – we just embraced them and went ‘well, this is going to be interesting, let’s see what kind of song we write when we can’t actually all be in the same room together,’ and embrace that, and I love that. That’s something that we’ve learnt from Jack White. He’s like, ‘well, if you have a string missing on your guitar when you get up onstage? Are you going to apologise, or are you going to play the song with that string missing and try and make something cool happen and rethink what you’re doing in the moment?’ and you might make something better. And so, we kind of see it the same, that this last year has kind of been the string missing on our guitars, but it’s made us create something.’

And although sometimes wondering ‘why do we put ourselves through being in a band?’, Saint Agnes very much live in the moment, not restricting themselves too much when it comes to what they see as successful.

‘The definition for success for a band changes constantly depending on what you’ve got right in front of you. We don’t have something specifically, like: ‘in 10 years we have to sell 20,000 tickets,’ no set things like that. It’s the next show that we want to make the best thing we’ve ever done, and the next song we write the best, and make it so that we’re as satisfied with what we’ve created as we can be… Because we do this band entirely selfishly, to please ourselves and work out our own demons, so the success is just what’s coming next and whatever particular achievement we’ve decided is right in front of us then.’ Kitty added that ‘Success is producing the best music, the best art, at that point in time. Saint Agnes is an ongoing endeavor so there isn’t like a goal to be achieved or reached, I’d imagine that we’ll carry on doing this in some form or other for the rest of our lives.’

Although there is some element of planning for the band – ‘obviously you’ve got to work with other people – you need to at least make some plans’ – Saint Agnes’ process remains largely organic. This originality is clear within the vision they create, and they spoke candidly about finding inspiration in the ordinary: ‘Everything motivates us, it isn’t any one specific thing… Everything in our daily experience plays a part in what we create. Our band isn’t like a separate entity that we go to work and spend time on, it’s the lens through which we view everything that we see and do.’ Authenticity also plays a major role, as touched on by Kitty: ‘Authenticity is really appealing to me and that can be any genre, so a band like Ho99o9, I think, are just unreal – where you just know they are being their authentic selves, they couldn’t possibly be any other way. I aspire to be as boldly authentic.’

On inspirations, Jon said that ‘we look up to people who have a singular vision, and seem driven to see that through. So, people like Trent Reznor, Jack White, PJ Harvey, Nick Cave; people that kind of steer their own ship. Obviously, again, they’re in bands or they’ve got other people around them who they take into account, but they very much have a vision of what they want to achieve musically, and artistically, and leave no stone unturned to try and get there.’ Saint Agnes have that with Kitty, Jon describing her as having a ‘much more singular vision’ than he does (‘which I love!’), helped by a shared passion for literature as well as music. Her insight lends itself well to the massive, almost cinematic sound of Saint Agnes: ‘When Kitty and I are writing a song, we talk a lot about the visual side; Kitty in particular, her contribution to the writing can often be to help direct things by focusing on a more visual narrative within it.’ As the directors and editors of their own videos, it’s clear that both Kitty and Jon play a vital part in the visual side of the process. Speaking of visuals, then, how do Saint Agnes view the significance of image and visual representation within the modern world of music?

‘I think that with music, you can’t avoid it being a visual thing. You have to make videos and take photos – people want to see you, even if the only time they see you is onstage, and they will make an assessment of what you look like and how that plays into what you’re doing, and I don’t necessarily think that everyone who dresses up for a show is a narcissist! I think that it’s a lot more to do with the fact that some people enjoy playing with the visual aspect. You look at David Bowie or Marilyn Manson, or Madonna, and these people that enjoy playing with it and it is part of their art… So, I think that that element is as prevalent as ever.’

And in relation to why Saint Agnes exist – aside from being the vessel through which Jon, Kitty, bass guitarist Ben Chernett and drummer Andy Head share their creative vision – the reason is a somewhat existential one: ‘One of the reasons we started it is because we didn’t feel that the bands that we wished existed were out there. And so, it wasn’t out there because the trends in music at the time just weren’t really breeding what we wanted to hear […] It always comes back to the way we view the world, and the reason we created this band is because we didn’t feel like our filter, our lens of the world was really represented, and we wanted to see it exist to help us process normal life.’

So, if Saint Agnes were to be a Frankenstein’s monster of sorts, made up of their inspirations, what would it look like? Drawing on the people that Jon cited earlier, Kitty reckons under thoughtful consideration that it would have ‘One of Marilyn Manson’s eyes, one of PJ Harvey’s. A heart of Metallica, and arms and legs from Ho99o9 for ultimate mosh pit devastation! And the darkest, most twisted bits of Nick Cave’s brain.’ A fitting summary of this band’s wild and innovative sound, which will again be heard this March on mini-album ‘Vampire.’