The humble and heart-pounding metal menagerie that is Bloodstock festival has now added more bands to the 2014 line-up. See how the monster is building below: 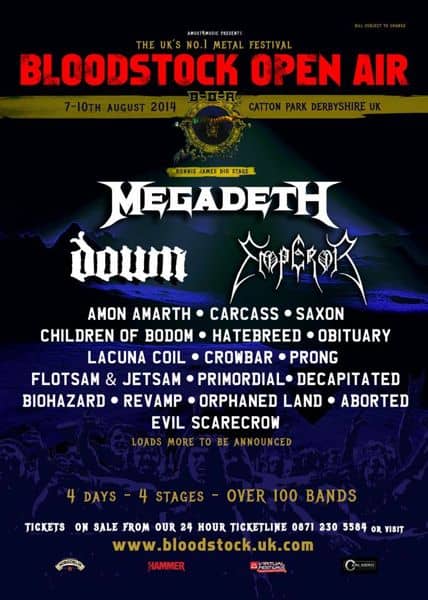 Ahead of their new album said to be released this year, Biohazard join the Ronnie James Dio stage. Billy Graziadei comments “We’ve watched some awesome Bloodstock line-ups over the past few years and we’re very psyched to be part of this one!  See you in da pit!” Watch their video for ‘Vengeance Is Mine’ here:

Israeli progressive metallers, Bloodstock festiva also join the bill.  The band, renowned for bringing different religious groups together were recently nominated for a Nobel Peace Prize. Frontman Kobi Farhi comments: “I could never imagine in my wildest imagination that an Israeli band would be followed by thousands of Muslims from around the world”.  Their album ‘All Is One’ is available now.

Death metal beasts Aborted, who have just entered the studio to record their new album, ‘The Necrotic Manifesto’, are also joining the fun. The band plan to head over to tour North America with Kataklysm, before returning to Europe for the summer festivals.

And finally, the band fronted by Nightwish vocalist Floor Jansen, ReVamp are coming to BOA! Floor comments “ReVamp is thrilled to play at Bloodstock this summer!  It’s a great festival with a strong metal heart in a metal-loving country for which we have nothing but great memories.  We can’t wait to rock the British crowd again!”. If you haven’t heard the band’s new album ‘Wild Card’ yet, here’s a video that might inspire you to…

Festival season is drawing ever closer day after day, and there are still many more bands to be announced before it arrives!