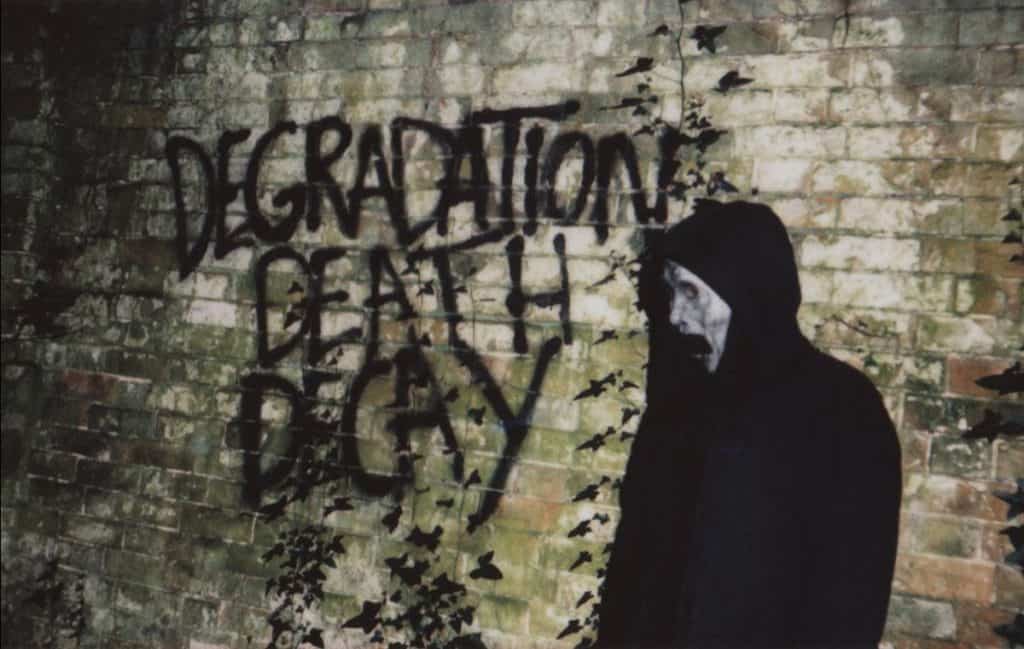 Part of a wider creative visual project around the album’s themes, the new video shows a clear shift in tone between sound and sight – the watcher is bombarded by a triptych of flashing dark images, none rendering themselves to a clear narrative but are instead offered up for interpretation with a strong influx of morbidity and mortality to remind us that we are all indeed human.  More on the extended videos in this project can be found on Ian’s website.

On the 8th October, Ian will also be playing a hometown album release show at God’s House Tower, Southampton. For the show, fans will also be able to purchase an exclusive ticket/LP bundle featuring alternative, one-off hand drawn artwork by Ian himself and limited to only 40 hand-numbered copies.

Inspired by the performance art of the 70s and Halloween – his debut is more art horror project than album. The record takes cues from the visual legacies of Robert Rauschenberg and Serbian film maker Marina Abramovic whilst musically drawing on bands such as Conor Oberst, Leonard Cohen, R.E.M and The Cure.

There’s a mystique in things that appear in threes. In Greek mythology it represents harmony, wisdom and understanding; for Pythagoras it’s the smallest number needed to create a pattern, the perfect combination of brevity and rhythm, while in literature there’s no story without a beginning, middle and end or past present and future. Summed up in the latin phrase omne trim perfectum, for the Southampton based songwriter the perfect trio presents itself as Degradation, Death, Decay.

“I’ve never really seen this as a solo project because I’ve been writing and recording acoustic music since I was about 15. I low key released some very old songs way before Creeper started and even during,” says Miles about choosing to step out on his own. “I don’t want to be the focus of this record, it’s not about me so I have decided to hide me. I want people to solely focus on the art.”

Layered with haunting vocals and a myriad of rhythmic textures, Miles sets out to explore one of nature’s most habitual cycles: our individual journeys though life, acceptance of life eventually coming to an end, and striving to give the listener full control over the art rather than focus on the inherently human force behind the mask. “It is the most natural of cycles that applies to everything, not just the fleeting journey of life. It’s one of the hardest but most important lessons I’ve learnt in life. Nothing is permanent. Everything ends and it’s important to acknowledge this and learn ways of accepting it,” says Miles.

Recorded in 2018 in Miles’ spare room, it’s taken three years to build the confidence to let Degradation, Death, Decay see the light of day, but equally he found comfort in the recording and mixing process itself. “It’s just taken me that long to build up the confidence to actually put it out there and mentally prepare myself for the prospect of playing shows,” he says. “I recorded it all in my freezing cold spare room where the heating doesn’t work. I listen back to this record, and I can hear how cold I was in my voice. I had to wait until my wife left the house because I felt anxious about singing while she was around, but now it’s so rewarding to make something out of nothing.”

Degradation, Death, Decay is more than just a debut solo album. It’s a project borne out of necessity that’s found its time to be unleashed. Having spent the better part of the last decade touring the globe, this is Ian Miles at his most vulnerable and at his most honest taking centre stage: an entity that can’t be stopped much less controlled. “I have always done this, and I will always do this. It’s like a dam that’s been cracked. You can’t stop it. It only gets bigger and I’m so excited about what’s to come.”