KMFDM are ready to unleash the next album ‘KUNST’ on February 26, 2013 on Metropolis Records. Fronted by the volatile and fiercely outspoken Sascha Konietzko, KMFDM has led the industrial revolution with their self-coined “Ultra Heavy Beat”: “It’s more proof of longevity through quality. Totally DIY, yet a successful business model and outlet for real meaningful art.” 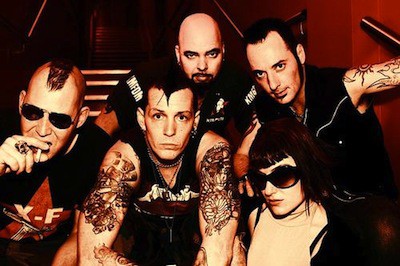 From the steady build of ‘Ave Maria’ to the relentless ‘Animal Out’ to their show of solidarity for the jailed Russian punk band, Pussy Riot, with the song of the same name, ‘KUNST’ exposes the underbelly of society’s shortcomings. “KMFDM has always been, particularly by means of our artworks, a propagator of female empowerment”, Sascha explains of that track. “I am a ‘fan’ of both Pussy Riot and FEMEN [the feminist Ukrainian protest group] insofar as these are young women who don’t just talk and complain but act and take things into their own hands and create worldwide awareness of their issues and be it – in the case of FEMEN, simply by calling attention to their actions by baring their t**s in public.”