Papa Roach, Rise To Remain, Gogol Bordello, Lit, Escape The Fate and Blitz Kids are amongst the 49 new acts added to the Download 2013 line-up, in what is set to be the biggest weekend in the rock calendar. Download Festival takes place in Donington Park on 14-16 June 2013 and is headlined by Slipknot, Iron Maiden and Rammstein. 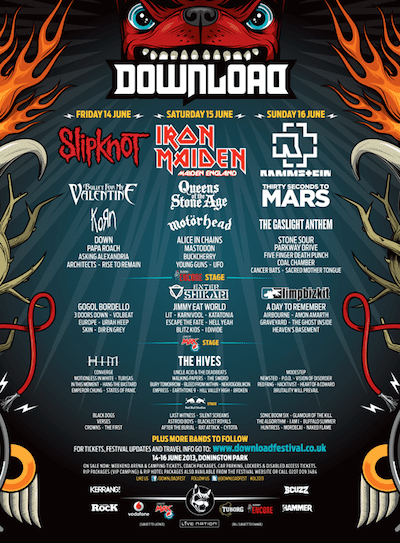 This year’s lineup continues to bring the best international rock acts from every corner of the globe to one festival site.  Confirmed for their fourth appearance at Download Festival are US rockers Papa Roach. 2013 marks the band’s 20th anniversary and they will celebrate by bringing hits like ‘Last Resort’, ‘Scars’, ‘She Loves Me Not’, and ‘Getting Away With Murder’ to a sea of mosh in Donington Park.

Buckcherry are welcomed back to Download Festival for a third time while Uriah Heep, regarded as one of the seminal rock acts of the early seventies, will make their Download Festival debut. Multi-million selling Grammy nominated nu metallers P.O.D join the bill, and following the release of their four-song EP earlier this year, titled ‘www.downloadfestival.co.uk, Newsted, fronted by Metallica’s long-serving former bassist Jason Newsted, are ready to rock in Donington.

It’s a battle of Scandinavia’s finest and Europe are sure to ‘Rock The Night’, joined by Swedish metallers Katatonia and hard rock band Graveyard. From across the way, Finnish Viking metallers Turisas are also confirmed.

Ready to thrash out some serious heavy metal are Japan’s Dir En Grey. Jetting in fresh from the US are bloodthirsty death metallers Nekrogoblikon, After The Burial, The Ghost Inside, Blacklist Royals and stoner rockers Red Fang. Aussie rockers Karnivool and Naked Flame are also announced, and bringing a taste of fierce French electronic heavy metal is The Algorithm.

Closer to home, Brit rockers Skin and Sacred Mother Tongue will take Download by the horns, joined by Brit metalcore groups Bury Tomorrow and Architects. Fresh from touring with Cancer Bats, Brutality Will Prevail and Reading prog-metal group Empress are also both confirmed.

Continuing to rock out for the regions are Cornish folk-punk group Crowns, Midlands heavy rockers Emperor Chung, Manchester five-piece Sonic Boom Six, Scotland’s States Of Panic and Bleed From Within, Brighton rockers Verses, UK alt-pop band Hill Valley High and Cardiff’s Astroid Boys. Tipped as one of the hottest breakthrough artists of this year are Exeter’s I Divide, joined by fellow Exeter rockers Rat Attack and Londoners Mordecai, Modestep and Hang The Bastard.

Last but certainly not least are UK heavyweight groove metal quintet Heart Of A Coward, York’s Glamour Of The Kill, Coventry rockers Silent Screams and Birmingham’s Cytota. Rockers The First and Broken also join the bill, and providing some gloriously twisted rock and roll Cambridge style are Uncle Acid and the Dead Beats.

Should be a grand ‘ol show!

Weekend and Day tickets for Download 2013 are on sale now and available from www.livenationexperience.co.uk.