Three weeks on the clock til’ Bloodstock!

With three weeks left until Bloodstock kicks off, there’s still a shed load of excitement being added to the bill. 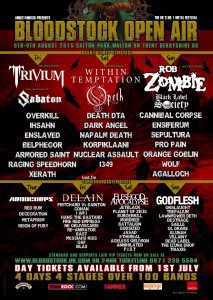 The New Blood Stage will see the ‘Metal 2 The Masses’ victor Countless Skies, as well as Sweden’s We Are The Catalyst. Also joining the bill throughout the weekend are Martry De Mona, Soulborn, Victorian Whore Dogs, Skarthia, Wretched Toad and Tombstone Crow. So plenty of new stuff to sink your teeth into.

On the Jagermeister Stage we’ll see City of Thieves, as well as blues-based rockers Pig Iron, and stoner-sludge fiends Morass of Mollasses. Cover bands such as Hanowar who sound a little something like a band we know, except they’re all H’d up. No, not in that way. Horror-metal punksters The Hell Puppets are also on the bill.

We put aside a paragraph to announce that the Battle of the Nations UK fighting team will be on site. For real, it’s to our amazement that they’re still alive, such is the brutality of their fighting. Maces, axes, broadswords, historical weaponry – oh yeah.