It’s a great feeling. The letter comes in the mail, all official like. You open it. It’s from the ATO. Good news or bad news? GREAT NEWS! “I got my tax back baby” DUNE RATS declare in their new summer banger ‘UP’, released today via Ratbag Records / BMG. 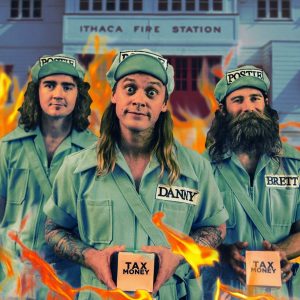 DUNE RATS inject that feeling into a song that finds Danny, BC and Brett pushing their sound on ‘UP’ to a place they haven’t been before. Still with their trademark punk rock sound, ‘UP’ is a song you can dance to, singalong to, mosh to. It’s the perfect song to kick off an Australian summer with new-found freedoms and live music returning right across the country.

The song came from DUNE RATS dreaming of a better time. “‘UP’ was written on the far South Coast of Australia in a small town called Eden,” the band said. “It was bloody freezing at the time, so it felt necessary to write a summer tune.”

“We ended up making this feel-good banger that was way different from anything we’d written before.” They continued. “We stumbled across the song while having a good time fucking around and cracking each other up. At first, we were reluctant to show anyone because of how different it sounded but eventually thought fuck it and embraced the tuneski!”

Once the band finished recording ‘UP’ they knew they needed a video clip that had as much energy as the song itself. Growing up watching super over-the-top film clips with hectic dancing from the likes of Britney Spears, Christina Aguilera etc, they couldn’t wait to do a Dunies take on those massive budget videos. They enlisted the help of their good mates Natalie Sim and Alex Flamsteed from MTMM who shot the video in the DUNE RATS hometown of Brisbane.

Danny, BC and Brett take on the roles of honourable posties, setting out to deliver hard working Aussies their tax refunds only to find themselves trapped in an alley by some thugs and needing to call on their best defence…..a stubby. Oh, and there’s chorography…..lots of chorography!

“It took a couple of weeks to learn the ‘UP’ dance in between every rehearsal, sound check and show during our Duniespalooza shows in Brisbane. Then we went straight into a three day shoot with a nasty four-nights-in-a-row hangover…. Was intense, but more than worth it!”

With a large cast of Brisbane extras and filmed at iconic locations such as the Ithaca Fire Station and Coorparoo Bowls Club (further solidifying BC Michael’s status as the unofficial Mayor of Coorparoo), the ‘UP’ video also features a special appearance by Matt & Dom from The Inspired Unemployed.

“When thinking who else we could rope in for the fun time ahead, getting Bugs, Big Twisty & The Funknasty plus all our mates from Brisbane was a no brainer. Getting to shoot this clip with them all was insanely fun, “ they added.

DUNE RATS will be hitting the road with some festival shows coming up including Party In The Apocalypse in Launceston on 3 December and This That Festival in Newcastle on 26 February and Sandstone Point, Bribie Island on 5 March 2022.

On getting back on the stage the band said, “We can’t wait to play ‘UP’ live anywhere and everywhere as it feels like whether it be a small pub or a massive festival this song is gonna be fun as all hell!”

‘UP’ is the first new music from DUNE RATS in 2021 and follows last year’s tribute to the highly strung truckee and mega Dunies fan Terry in ‘Too Tough Terry’ which was voted into triple j’s Hottest 100 for 2020.

With three albums under their belts, including 2020’s ‘Hurry Up And Wait’, their second consecutive #1 on the ARIA Album Chart, Dune Rats have been working hard over the last few months, writing and demoing new material for album #4. With ‘UP’ as the first appetiser, we can’t wait for the main course in 2022!