Iconic alternative / electronic band GOOSE are pleased to announce a brand new release with the arrival of ‘Endless’, lifted from the forthcoming album due 11th March 2022. Fusing a heady dose of 90s inspired electro-pop melodies, alongside modern sweeping production, ‘Endless’ charts a new direction for the Belgian quartet. 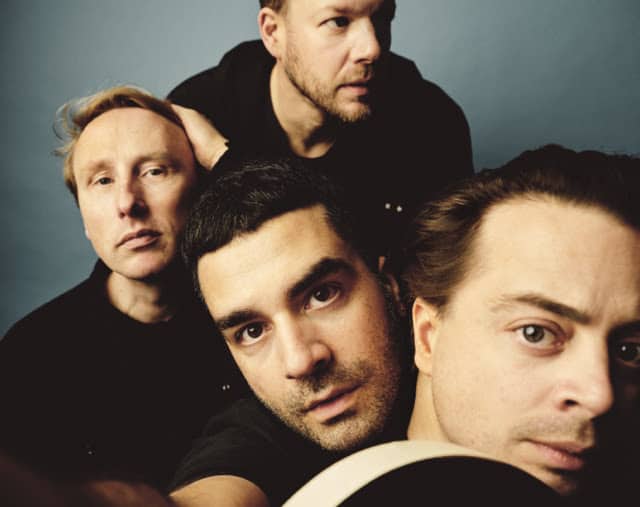 Lead singer Mickael Karkousse explains: “Although we ended up at the legendary Motorbass studios in Paris, we did create the DNA of the record in our very own Safari Studios. Being in the comfort of our homestudio it allowed us to experiment and look fort that ‘sparkle’ that made the four of us really excited. ‘Endless’ was that sparkle: it has guitars, synths, pumping drums and a dreamy vocal hook for the chorus. It has a lot of power and melody at the same time, it all fell into place for all what was about to follow.”

GOOSE formed two decades ago, but they still sound as fresh as ever. A group whose incredible achievements place them at the forefront of the crossover between electronic music and rock, the Belgian four-piece have found renewal by returning home and focussing on the bonds that keep them in place. New album ‘Endless’ is a punchy, dynamic project, packed with energy and emotion, one that finds GOOSE utilising everything they’ve learned in order to fully realise everything they’ve yet to obtain.

Four musicians operating on the same wavelength, ‘Endless’ has its roots in the raw independence that drives GOOSE. Having released hugely successful material on iconic labels such as Skint Records and the deeply influential !k7 they’ve opted to embrace their freedom and take the independent route via their own Safari Records imprint. The label shares the same name as the band’s Safari studios in their hometown Kortrijk, a hub for free-wheeling experimentation, and a place for GOOSE to do what they do best.

‘Endless’ is the first new album from GOOSE in five years and began as an avalanche of ideas in Safari Studios, before GOOSE opted to bring in French producer Victor le Masne who sat down with the band at their HQ, before inviting them to Motorbass Studios in Paris – one of the most renowned recording hubs in Europe. The decision to include an outside perspective could be what makes ‘Endless’ such a powerful record. Each note is sharpened, each effect magnified, with Victor le Masne tasked with pushing GOOSE to the next level.

‘Endless’ is a record fuelled by experience, that strives toward innocence. GOOSE are a band propelled by their instincts, by what Mickael Karkousse terms “some kind of quiet confidence. Don’t talk about it too much – just do it! Have confidence in the process, and in each other… And then it’ll be good.” With an international tour planned, GOOSE are already preparing for life beyond COVID. Using their studio as a base to escape the travails of the world, they’ve leaned in on what they truly need from one another.

Working to their own timeline, responsive to nothing but their creative desires, GOOSE have come full circle; more than 20 years on from their debut album ‘Bring It On’ they’re a band renewed. Looking ahead to their next plans, Mickael Karkousse simply laughs: “We’re just getting started!”