Holding down the fort for reptile lovers on Holderness Road is the Creature Cabin – Hull’s hotspot for people who are suckers for scales and all cold-blooded creatures. 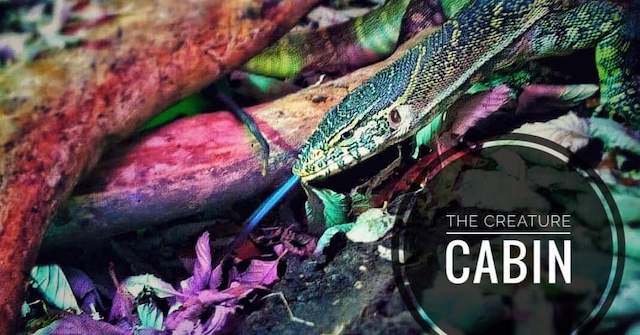 Dom sat down with Molly Wells-Rhodes and Jamie Burton, two passionate owners of the Creature Cabin. As their interest grew over the past decade, their joke idea of opening a reptile related business blossomed into a reality. But their service to the scaley creatures wasn’t always easy.

“Molly had quite a large collection when we first met,” says Jamie. “We’d lived together for maybe a year, and Moll’s collection was getting lower and lower. I was scared of it; I didn’t want her to drop out of it.”

So, it was an act of love and support for Molly that caused Jamie to get over his fear in the end. Rather romantic, isn’t it?

But Jamie’s amorous tone is immediately diffused by the moment he changed his opinion on the creatures.

“Molly got bit by a western hognose [snake] and I instantly fell in love with them,” he laughs.

“So, we went to a reptile show and I had the intention of buying a tiny baby hognose and then bought the biggest female hognose I’ve ever seen. Then never looked back.”

From a small bite to an impressive collection that boasts of over 30,000 of hognose snakes, I think it’s fair to say that the couple were quickly enveloped in their fascination for reptiles.

But what leads someone to form such an unusual hobby?

Molly credits her upbringing and home-schooling with encouraging her to develop her own unique interests.

“We grew up in Spain and France for a lot of my childhood. So, we spent a lot of time finding these animals around us in the wild, in the garden and when we went on walks. Reptiles were the one thing you had to find; they weren’t ever out there in front of you. It just caught my interest over time,” she says.

Spurred by the bravery of Steve Irwin, Molly grew confident enough to approach snakes and physically interact with them.

“I just thought if he could do it I can do it,” she states.

Armed with a stick and a bucket, when she was just a child she caught a snake which then proceeded to escape and bite her hands.

Having had previous experiences of biting from rabbits and pet hamsters, she was actually surprised by how much less pain was induced from a snake bite in comparison to that of a rodent bite.

“Once you had that initial bite, you’re just like oh is that it? it’s nothing scary now,” she says of the snake attack.

Interestingly, she explains that a lot of fear of snakes stems from cultural and religious traditions where “serpents are seen as this evil thing. Because they are cold blooded and emotionless, they’re not very cute.”

But Molly admits for a lot of communities where they do not have access to knowledge about the types of snakes in their area and how do identify them, they fear of snakes would be justified as it would be difficult for them to differentiate between the harmless and venomous. That’s just like the misconception about juvenile rattlesnakes. The little ones are normally less dangerous if they bite in comparison.

Jamie adds: “when people get bitten, 9 times out of 10 they’ve either accidentally stepped on it or are trying to pick it up. So, if u just avoid it, don’t touch it, you’re good to go.”

How do we save these slithering souls from extinction?

“I think at this point we’ve got the technology behind us as far as antivenoms go,” says Molly. “Education is the key at this point, to get out there to countries and areas where there isn’t that education – even in military bases where we’ve got troops going abroad; they don’t know the difference between a cobra that could kill them in the middle of the desert, or a snake that is completely harmless.”

Despite the stigma and the fear surrounding snakes, they are actually very useful to ecosystems says Molly. They keep rodents and deadly diseases away and just need to be handled with the appropriate PPE to protect both handler and creature,

There is only one venomous snake in England but the duo feel that overall, reptiles do not get the same pride as other Britain-based creatures. In fact, Pheasants who are not native to the UK but have been brought across, bred, and released into the wild, are one of the biggest causes for the decline in the snake populations.

But what is Creature Cabin’s advice to the public if we catch sight of an adder or out-of-place reptile out and about?

“First thing to do is make sure that there is a native species. There’re so many pets that are dumped, lost, escaped, that shouldn’t be put back into the wild. Not necessarily because they can damage the eco systems as they’re not adapted for living there, but they’ll just die slowly,” says Molly.

There are some Facebook groups and some great identification groups that you can post an image of the reptile to who will help you find the relevant information to identify the animal.

But what if you find a snake in your own backyard?

“You can move them somewhere else; compost is a great one as they love the heat don’t bring them in,” she adds.

“We have horrific winters, two days of summer, and we still have reptiles here which is such an amazing thing.”

Locally, the reception of the Creature Cabin has been overwhelmingly positive according to the duo.

“I think people can see what we do with the company – that passion and that care and that real drive for the welfare. When you walk into our shop you might not see any of the animals because we’ve provided them somewhere to hide, we’ve provided them these natural environments within the enclosures whereas you might see in the other shops they’ll keep it as bare as possible so you can see the animals always on display and that might help sell the animal because you can see it. but if you want the animal to thrive when you get home, you can’t keep it in that same environment because you’ll have problems. Showing people what to aim for is really important.”

Molly reiterates the importance of buyers conducting research before they buy a reptile, and the Creature Cabin strives to ensure that the animals they sell are taken in by people who will care for each creature’s welfare responsibly.

“There is no animal that has evolved to be a training wheels animal, a lot of these animals live twenty plus years…I think its so important for people to buy based on what they want and what they actually want to work. If someone comes in and they want this high maintenance, hard to find, difficult, rare animal, I wouldn’t go ‘no start with something more basic.’ I would go ‘if you want that animal you need to show me the research you’ve done, the right preparation, [and that] you’ve done everything to show me that this animal would thrive within your care.”

In order to nurture the passion each potential buyer has, the business provides care sheets for each animal which details what they would need to thrive, in hopes that it would ignite a want to do some more research.

The idea of certain reptiles being dismissed as ‘just a normal’ one is repulsive to them. Molly argues there’s “no such thing.”

Together, they work to improve understanding on a local and national scale. Yet despite their efforts to educate buyers, Molly admits to sometimes struggling with the fact she cannot control the future of each sold creature’s care.

It’s clear how much she cares about the animals in her care – so much so that she would sacrifice the shop if finances got in the way of the animals’ wellbeing.

“The welfare always comes first,” she stresses. “If we don’t have money to keep the shop going and it meant that the animals would suffer, we wouldn’t stay open for the sake of getting that last bit of money. If we can’t provide the best for these animals, then the shop isn’t what we stand for and therefore we wouldn’t have the shop.”

The Creature Cabin is more than a pet shop – it is a community that helps curious minds find common ground in the presence of these fantastic creatures. Molly claims that for a lot of lonely folk who find themselves on the outskirts of social circles find comfort in the solitary nature of snakes and reptiles.

“There is a stereotype that reptile keepers are odd and in such a sense it’s very, very true. I think because reptiles have been the underdogs…they appeal to a lot of people who have those same thoughts about themselves. We get a lot of people who see themselves as outsiders or struggle with social situations or who don’t necessarily want to be normal.”

Cultivating a diverse world of people in trackies or full goth attire, the Creature Cabin has become a haven for outsiders who have a passion for reptiles.

Fuelled by excitement and passion, the Creature Cabin fosters a community in which curious minds are encouraged.

“There’s something really cool about seeing an animal behind glass that could kill you,” says Molly. “Just knowing that this animal is more than you are, more powerful than you are and stripped down to the basics, that animal has more over you than you have over them, if they wanted you dead they could [kill you].”

For those looking to leap into this community Powerful and exciting about taming dangerous animals, The Creature Cabin recommend attending the Doncaster Reptile Show, joining a Herpetological Society and to get involved in any wildlife group you can.

With regards to the future, the business has hopes of opening an educational facility and providing talks and workshops that will engage with schools without money being involved. Jamie is keen on going abroad to research the natural habitats their reptiles originate from in order to make their life in the UK as comfortable and authentic as possible.

You can find more about the fascinating small business on Facebook and Instagram. They’re open 7 days a week and located on 179 Holderness Rd, Hull HU8 8SR. 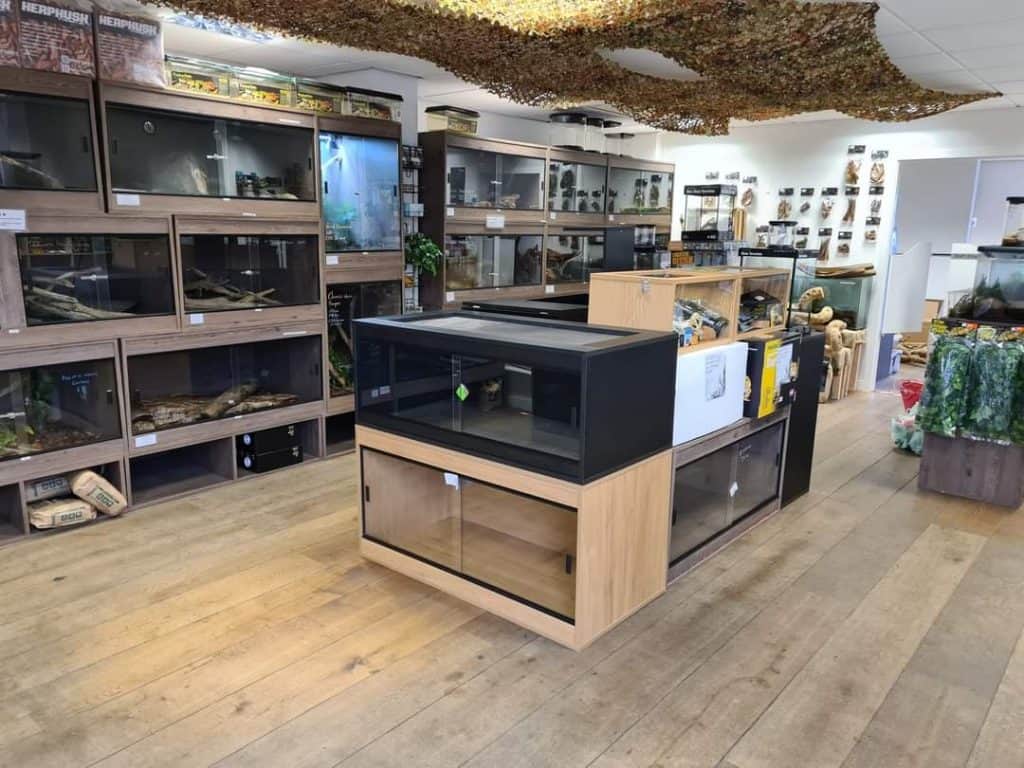