Birmingham’s Johnny Foreigner are heralding the imminent arrival of their third album with a double A-side single. 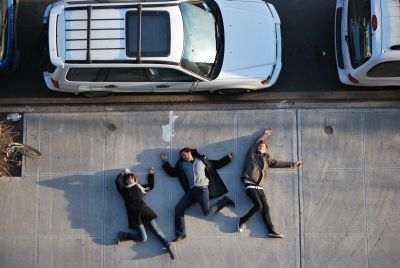 ‘(don’t) show us your fangs’/’the hand that slaps you back’, is released on September 12 on Alcopop! Records, followed by the album ‘Johnny Foreigner vs Everything’ on November 7.

Alexei, the trio’s guitarist and singer, says the band are bursting with excitement to announce the upcoming LP; “It was made this spring and summer in our hometown by our old friend Dominique James… “We started writing it two years ago, and staggered recording and mixing over five months. The title came first.”

He observes creating the album was the biggest challenge faced by the band in their career; “This is the first full length record we’ve made without a Grammy-nominated producer, without contracts and New York and professionals. The worst thing about leaving the world of corporate-funded labels, was knowing that sooner or later we’d come to this point; having to make a way better record for a way worse budget… and I’m beyond proud to say that I think that’s exactly what us and Dom have achieved. We’ve made the record that sounds like we do in our heads.”

johnny foreigner are headlining the label’s stage at the Southsea Festival on September 17 and expect to announce more gigs soon. You can listen to a preview of ‘Johnny Foreigner vs Everything’ on the band’s website.