‘Radial Images’ is the debut album of Love Among The Mannequins, a four-piece band that used to be a three-piece band called Amateurs. They formed in Brighton UK in late 2009 and comprise Tobias Hayes (Meet Me In St. Louis, Shoes And Socks Off, Shield Your Eyes); Jonathan Baker (O You Broken Eyes); and Alexander Ross Petersen (Elle Milano, O You Broken Eyes) and Steven Andrew Stride (Crooked Mountain, Crooked Sea). 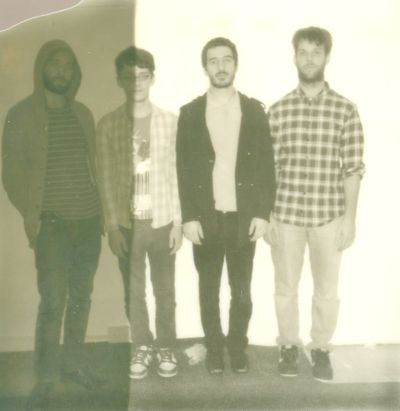 Initially there was no manifesto for a “sound”, other than it would probably involve a lot of distortion pedals and, inevitably, plunder a leaf or two from Madonna-era Trail Of Dead. ‘Nikolai Fyodorovich Fyodorov’ – the first song written, the opening track on ‘Radical Images’ – set the precedent sonically and lyrically: wearied of the introspection of former projects, it was decided that inspiration could be found in the lives (and deaths) of esoteric and enigmatic historical figures, whether hero or villain, madman or guru, real, fiction, distortion, or a refraction of the truth via the surreal eye-lens of a disembodied and unreliable narrator. This record boasts tales of geneticists, dystopia and general ruination mixed up with splashes of Pavement, Autolux and and Drive Like Jehu

Love Amongst The Mannequins are set to tour the UK in November with Tangled Hair. The album is out on November 7.