London four-piece, younghusband are set to release a new EP via the Sonic Cathedral label on the December 5, 2011. The ‘Crystal’ EP features four tracks and is the follow up to their critically acclaimed double A Sided debut single  ‘Carousel’  / ‘Nothing, Nothing’ which was released on Too Pure in June. 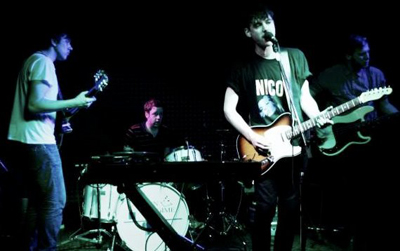 Recorded with Jimmy Robertson and The Oscillation’s Demian Castellanos during the summer in a studio in Hackney, the new EP is released on double 7” vinyl and digital download.

Formed in 2010, the younghusband line-up of Pete Baker (drums/pads), Adam Beach (guitar), Joe Chilton (Bass/vocals) and frontman Euan Hinshelwood (vocals/keyboards/guitar), who is also a member of Emmy The Great, made their live debut at Truck Festival the same year.

Since then they have steadily built a growing fanbase that includes Zane Lowe, Marc Riley, Guy Garvey and Jarvis Cocker. younghusband play the following shows prior to the EP release.

10 – London, Lexington – Clash Ones To Watch