The Dropkick Murphys have announced a UK tour to coincide with their new upcoming album ‘Signed And Sealed In Blood’ to be released on their own label ‘Born and Bred Records’. 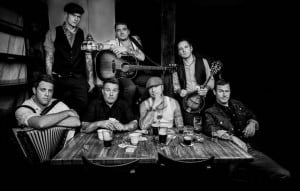 The Boston-based band record the album at the city’s Q Division Studios with producer Ted Hutt and was mixed by Joe Chiccarelli. “We had such a great time writing our last album, ‘Going Out In Style’ and we were excited to get back into the studio right away,” says bassist and co-lead singer Ken Casey. “Where ‘Going Out in Style’ was a concept album – kind of intricate and difficult—this one is catchy, fun, and is gonna damage a lot of speakers.”

The Dropkick Murphys have had numerous successes since blazing onto the scene in 1996. Selling around 4 million records worldwide whilst collaborating with superstars such as Bruce Springsteen among others, and having their hit ‘I’m Shipping Up to Boston’ featured in an Oscar-winning film by Martin Scorsese, the Murphys show no signs of slowing down.

Initial UK and Ireland dates will begin in January 2013.