Alaskan rockers, 36 Crazyfists are back with their latest offering, ‘Time and Trauma’. Following 2010’s ‘Collisions and Castaways’, the band’s 6th studio album is set to be released on February 16. 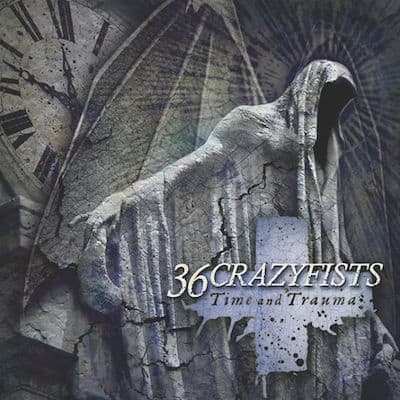 36 Crazyfists have gained notoriety for their unique blend of genres resulting in their very own trenchant brand of metal. This is the band’s first album since the departure of long time drummer, Thomas Noonan, but with guitarist, Steve Holt, back at the helm of production, ‘Time and Trauma’ proves to be no exception to the band’s ever-evolving sound. Kicking the album off in style is ‘Vanish (We All Disappear)’ which builds from the faint sound of feedback to a cyclical melody that clings on until the very last chord. Vocalist Brock Lindow’s growling vocals are a welcome sound that provide a great balance to the playful, but sinister guitars throughout the song.

Each track has a subtle element that makes it sound completely unique to its predecessor while maintaining a familiarity and consistency to the album, most notably heard in ‘Sorrow Sings’. Frantic guitars chase dark melodies through the track to break up the dynamic, heavy intro leaving a mildly unsettling and completely bewitching feeling by the end of the song. Each track on the album brings a different fundamental element to the table. ‘Lightless’, a fast and in-your-face song brings an uplifting melody woven through melancholy lyrics to paint a contrasting image that works in the best possible way.

This album is artfully constructed through 36 Crazyfists’ unique way of bringing the album to a close without ever slowing down the pace. ‘Gathering Bones’, the complex penultimate track gradually taps the brakes by maintaining an eerie and mildly unsettling tone before diving straight back in to a familiar, heavy sound. The album comes to a close with the compelling ‘Marrow’. Lindow’s gravelly cadence is complimented by enticing female vocals to create a gripping and moving track that brings a perfect conclusion to the album. Cooler than a glacier and heavier than a polar bear, this Alaskan powerhouse ain’t your average metal band.