Ohio band, Beartooth, have launched another hardcore collection into the rock stratosphere with their latest album, Aggressive. The album is a powerful collection of songs that blends good old fashioned punk rock with screamo, pop-punk and even some notes of metal to result in an obvious, raw energy that radiates throughout the twelve tracks. 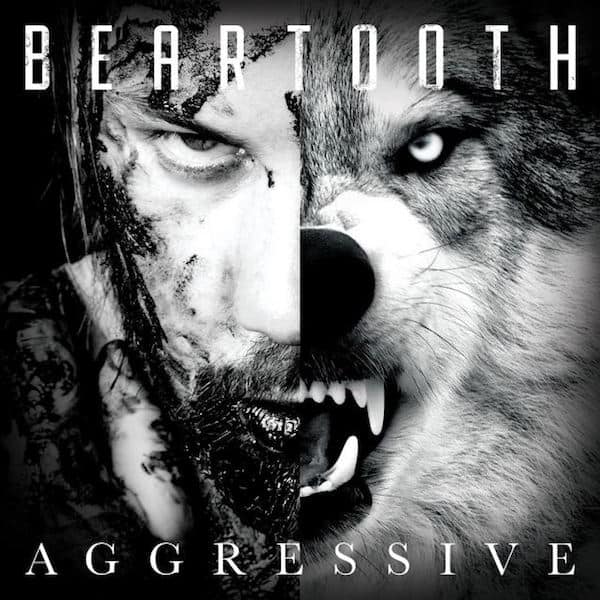 Each track throws up a middle finger to the establishment, normalcy and negativity in the best possible way. Melodic choruses and punk-fuelled verses work together beautifully to highlight the honest, empowering and dramatic nature of the lyrics. The title track, ‘Aggressive’, sets a high bar for the album with heartfelt lyrics right out of the gate. Vocalist, Caleb Shomo’s crooning vocals are paired with a growling, throaty layer underneath that creates an unsettling, but empowering atmosphere. Each track succinctly summarizes a wide range of frustration, anger and everything in between, as heard in ‘Burnout’ and ‘Find a Way’. Shomo’s unfiltered, vocals transmit tortured and ostensibly honest lyrics throughout the album, and notably in ‘Loser’. An unapologetically heavy intro throws punches right away, leading into Shomo’s impressive vocals with the ability to seamlessly transition from mighty roars and screams to catchy choruses. In typical Beartooth style, a powerful and honest confession is attached to a heavy track with the lyrics, ‘It wasn’t easy being rejected by the thing I wanted so bad, to be accepted, to be wanted, to wake up and say this is going to be a good day’.

As the album continues, heavy intros dominate in tracks like ‘Fair Weather Friend’ and ‘Censored’. A gleaming punk rock influence radiates throughout the album as a whole, but Beartooth have crafted their own niche in the hardcore genre through lyrically potent, hard-hitting songs that are like a therapy session condensed into 3 minutes. ‘Hated’ starts with gentler vocals easing into a heavier sound. Instrumental drops leave vocals standing alone for seconds, building a powerful anticipation. ‘However You Want it Said’ and ‘Always Dead’ throw more fuel on the fire with raging drums driving an anarchic pattern.

Our real standout track of the album has to be the mighty ‘Sick of Me’. A heavy and dynamic, guitar fueled intro throws us into fast, aggressive lyrics and yet another infectious chorus, balanced by heavier verses. With a definite extravagance, this track is honest, catchy, heavy and all good things wrapped into one. Closing out the album on a slower note is ‘King of Anything’, which strips down Beartooth’s aggressive sound without losing any substance. With Shomo’s raw vocals accompanied by just a guitar, this track is dramatic, poignant and to the point. The stripped down nature of the track emphasises the emotional value of the album.

Aggressive is an impressive collection of hardcore infused tracks that work together to create an honest declaration of the anxieties of life, all under that heavy Beartooth sound that we know and love.