We at Soundsphere magazine are keen amateur scientists that, often articulate the big musicological hypotheses! We have all pondered what would happen if you dumped Hollywood Undead, The Streets’ Mike Skinner and a case full of classical vinyl into an industrial-sized blender, and then scraped the contents into the dynamic music scene of urban Leeds. Fortunately, the northern alternative hip-hop group Ceiling Demons have conducted such an interesting experiment on our behalf, with fascinating results. 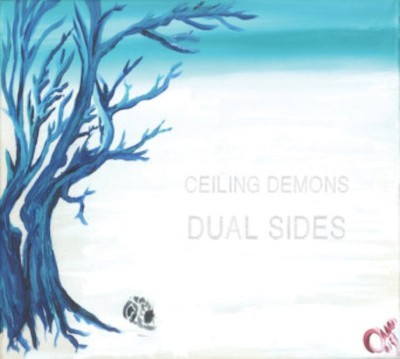 The residue has mutated into a heavily stylised visual package, as the band members are shrouded in a shadowy air of anonymity that is enhanced by their donned tribal-esque painted masks. However, it is with visual appearance that the Hollywood Undead comparison ends, as Ceiling Demons’ sound veers away from brash west-coast influenced beats, sleazy lyrics and punchy guitar riffs reminiscent of 80s hair-metal bands that graced venues down the Sunset Boulevard.

Instead, Ceiling Demons create a stylish musical soundscape, that consists of haunting ambient samples derived from classical string sections and intoxicating vocal harmonies akin to the operatic aria. These stylish ingredients are a joy to succumb to during the musical interlude, which occurs a quarter through the album. This towering audible delight is underpinned with the obligatory big beats of contemporary alternative hip-hop, and varnished with the rich lyrical tapestry of gritty urban life in Leeds, crafted by the MCs – Psy Ceiling and Dan Demon.

Fortunately, ‘Dual Sides’ directly side-steps the realms of Mike Skinner’s trivial contemporary lyrical observations of “You’re fit, but, my god… Don’t you know it?” Thankfully, ‘Dual Sides’ is an album crafted using subtle lyrical paint strokes, typified by the standout track ‘Lord, I Must Be Strong Now’ – “Love the loveless and break the heartless.”

The let-down, ‘The Mirror’s Image’, is the exception to the album’s style; it seems comparatively out of place with the other stylishly crafted tracks on the album, and it impedes the album’s fluidity. The lyrical content and delivery of this one appears to swerve into a blunt ranting tangent, and the track’s use of synthesised instrumentation sounds like a discount 90’s Casio keyboard setting.

Highlights of the album are the uplifting tracks ‘Lord, I Must Be Strong Now’ and ‘Every Step Is Moving Me Up’. These two examples are radiant representations of how thought provoking and sincerely positive alternative hip-hop can be, as both tracks resist the generic urge to spit aggressive misogynistic nonsense down a microphone. After listening to ‘Lord, I Must Be Strong Now’ on repeat two or three times, one feels compelled to sprint to the nearest homeless shelter and start doling out warm soup and optimism!

Unfortunately, it is possible that the strong use of the Yorkshire accent will ultimately be the contentious issue with Ceiling Demons’ album, that distracts the listener from the good in this album. However, while the infectious positivity of the album still courses though our veins, we can’t help but think of the musical disability Authentic Geographical Aural Representation Syndrome; no contemporary British musicians says ‘Nowt’ with an unashamedly proud Yorkshire accent quite like Alex Turner, and it did not impede upon of the success of the Arctic Monkeys. Ceiling Demons: stay true to the regional authenticity in your music, it can work!