York-based singer-songwriter, David Breslin mixes melodic and entrancing guitar hooks with dark, deep and desperate lyrics to construct his debut album – The Trees Are Coming. The theme of trees and nature is evident in the first and last tracks, which is a neat reminder of how this album brings the outdoors creeping into your headphones. 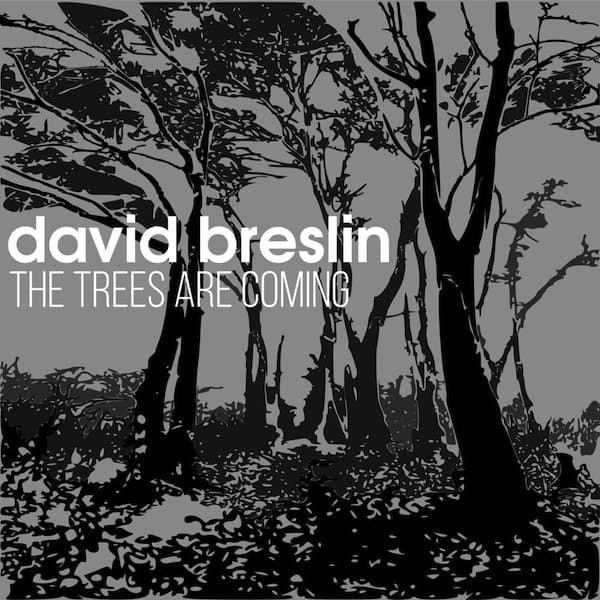 With the title track opening the album, you could be forgiven for thinking that the remaining songs will maintain a similar sturdiness and reputable nature… But, the following two tracks open a door to a more a sinister room telling stories of suicidal buskers and drug addicts in ‘Bagman Sings the Blues’ and ‘Cocaine Chicane Chaconne’. The lyrics, especially in these two songs, showcase Breslin’s great talent for orchestrating tales in the listener’s minds that might be reminiscent of our daily lives and what we unconsciously observe. However, the guitars portray finger picking happiness in the former and doom-like, strumming minor chords in the latter, highlighting another contrast in Breslin’s repertoire.

To reinforce the lyrical genius on this album, Breslin cheerfully sings ‘I’m a psychopath and I’m told, I have a nasty laugh harsh and cold’ on middle track ‘Cat Among Pigeons’, which is the last force of dark intent before a sharp contrast leading into some well deserved, loved-up songs in ‘You Are Gorgeous and I am Shy’ and ‘Light To Give’. We are introduced to Breslin’s use of new instruments in the track ‘You are Gorgeous And I Am Shy’ (harmonica and cajon) which add a fuller sound to his jangling guitar; our only critique of his guitar-only tracks is that they may sound a little empty by comparison. But saying that, Breslin’s playing and harmonies are mesmerising and intriguing.

We can feel a strong influence from 70s singer-songwriters like Jim Croce, Gordon Lightfoot or even Cat Stevens, but Breslin adds a more mysterious and shadowy twist.

Our favourite track off the album is, without a shadow of a doubt, ‘Ashamed’. In this we find a more bluesy sound with a crescendo that would make Beethoven blush. The use of synths and drums pull echoes of New Order into the mix and ultimately, makes a brilliant tune.

Overall, this is a fairly successful debut album for David Breslin and it shows a good alternative option to some current singer-songwriters. It is enticing, technical and sincere.