Fwoh! The wait for this album was long and crippling, but now that it’s here, we’re going to say something that could potentially divide the crowd: 2009’s ‘Beast’ was a f*cking awesome album. It had tracks that we still dig now, like ‘Sh*tlist’ and ‘Coldblooded’ for instance, or even the cover of 16 Horsepower’s ‘Black Soul Choir’. Now before we cross into that dangerous line where things start getting compared (oh no, we don’t wanna go there!) let’s just say that this writer had fairly high expectations, and of course, with DevilDriver, you know you’re in for a blast of metal, no matter what. 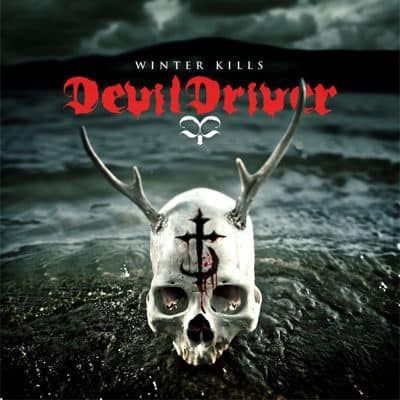 So is ‘Winter Kills’ that blast? Err, hell yeah! There are a couple of things to say though, and the first is that this isn’t an overwhelming album. It’s good, in fact it’s damn good, but it’s not special. You’ll stick it in your CD pl…err, sorry, nobody knows what they are anymore, let’s embrace the internet. You’ll press play on iTunes, the drums will hit hard, and you’ll throw a goat and yell “DEVILDRIVER!” just as though you were seeing them live. It’s the same goodness you’re used to, Dez Farfara’s vocals ever strong, and that opening track’s a goodun’, if a little drawn out. Then ‘Ruthless’, follows in a similar vein with its simple riffs and fairly slow drumbeats, and brings out its mosh qualities – those who have seen this one live know that statement is true! It’s a decent song with a cool breakdown, but like its predecessor, is easily one of the weakest. ‘Desperate Times’ on the other hand, is without a shadow of a doubt, the best. It’s fast, aggressive, and encapsulating, and the chorus brings out the melody at the perfect moments. This is what metal is all about! We wonder, is this track going to overpower ‘These Fighting Words’ and deem it insignificant? That song should be afraid…*stands back in shame with the sudden realisation that a song is not a sentient being*. Heh, asterisks. That’s an internetty thing too, right?

That melody spills over into the next couple of tracks too, especially with ‘The Appetite’, which combines the bottom and top guitar strings to create the ultimate contrast! Well, ultimate might be taking it a little too far, DevilDriver do this stuff well. Anyway, this song is worth it just for the solo. Trust us here.

The rest of the tracks are cool and decent, but as we say, nothing special, certainly not up there with their best, and ‘Desperate Times’ blows every other track out of the water in our opinion. There are some awesome moments, for instance the breakdown and solo in ‘Curses and Epitaphs’, or the chorus riffs in ‘Carings Overkill’, so it’s worth listening out for those moments, and the fans are gonna dig it for sure, but will this leave the same impression that past albums have left? Probably not, but it’s certainly worth a few listens. The penultimate track ‘Tripping Over Tombstones’ hammers you into the dirt…again and again…and the final track is a cover of (surprise surprise. No seriously!) Awolnation‘s ‘Sail’, and like the original, packs some serious emotional power. Aah, you’ve gotta love it when a band takes something radically different to their own material and flips it onto its arse for the benefit of the metalheads – Children of Bodom, we’re looking at you.

Above all, it’s encouraging to see a band like this still going strong. Anything goes, and DevilDriver are one who hopefully will stick around for a long time. Cheers lads, we’re all looking forward to more!