Album Review: Into It. Over It. – ‘Intersections’

Home » Album Review: Into It. Over It. – ‘Intersections’

Into It. Over It. is notorious multi-tasker Evan Weiss’ latest side-project, and those familiar with his previous output, particularly the work with Mike Kinsella of Owen, will have a reasonable grasp of what they can expect from the often brilliant lyricist here. 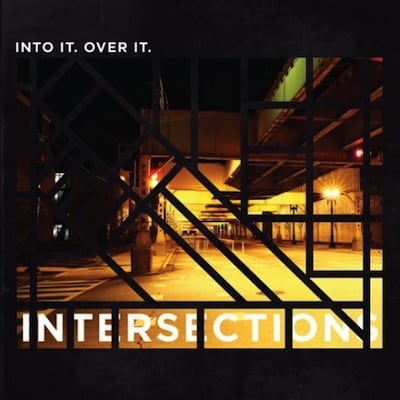 It’s a shimmering collection of raw, poetic moments, and when the poetry here begins to approach, what we in the “po-biz” term, the lyric register, then the album really starts to soar. Album opener ‘New North-Side Air’ opens with the simple and honest pledge that Weiss has “traded tobacco for new north-side air”, and this opening line sums up much of the album’s tone. The lyrics here are personal, honest, and often fairly mundane. The effect of this is that the entire album feels like it’s being sung to you by a close old friend you haven’t seen for a while, and he’s merely filling you in on his past year or so.

Fortunately there are plenty of narrative pyrotechnics in Weiss’ life to balance out what could otherwise become stifling banality. ‘Obsessive Compulsive Distraction’ is a real highlight on the release as Weiss’ insularity allows us to explore some difficult areas of his psyche. There are a few moments where the lyrics aren’t quite enough to raise a song over its more sombre melancholy moments, but for the most part it is a thoroughly convincing weaving between song and lyric that keeps this album pulsing through your earbuds as something pretty special.

Producer Brian Deck was an ideal choice for ‘Intersections’ as he has a knack of knowing how to allow artists who like their output raw and lo-fi to keep their music distorted and insular without becoming stifling and claustrophobic. For all the fuzz and feedback on display here, the album feels open and a cool breeze floods throughout every held note. Naturally there’s more than a hint of Modest Mouse about Into It. Over It. and that’s never a bad thing, while the lyrical dexterity and openness call to mind the Sundowners of this world.

It’s an album released at the perfect time too. This isn’t a soundtrack to blinding suns, and beers at a barbecue, this is the melodic background to wrapped-up walks through falling leaves and occasional showers. As you pull yourself deeper into your scarf or collar this autumn and winter, Weiss will draw you closer and closer into his world of simple pleasures and resentful heartbreak.

Which leads us to an important point: this is one moody album. The resentment is front and centre, with more than a little smattering of snark thrown over the top. For some, it might be a bit too much – while the music is the sound of emo growing up, the lyrics are still overwhelmingly narcissistic and “woe is me”. But for those of us who feel our minds often sliding into such a funk, it’s lovely to have company there.

It’s not all lost love and naval gazing though. ‘Intersections’ will take you on a reflective journey through religion, murder, in-scene politics, and a life lived mostly out of the back of a van. It ponders, it glides, it occasionally rocks, and now and then it really seethes under the weight of its own bitterness. Into It. Over It.? This writer is all in.