Like melody and feel-good tunes? This is your album. Your band. And their new disc ‘Peace’ is packed full of that and emotion, with the ideal mix of melancholic borderline tearjerkers and upbeat jumpy happy songs. It’s tame yet energetic, with plenty of diversity, and that’s the stuff we like to, erm, get our ears on (that worked, right?) at Soundsphere. Oh, we like to dive into the decaying crumbling dystopia of heaviness, but we also like to put the pieces of our minds back together with gentle stuff like this as well. The ultimate mix! Heh. Yeah. But this album! It has the melody of 70s rock classics, the better part of the indi vibe of the twenty first century, and the pacing of a river. Not a calm river, nor a violent river, but a gentle rock-less river that pulls you alongside the bank at a steady euphoric speed. Bet it’s warm, too. 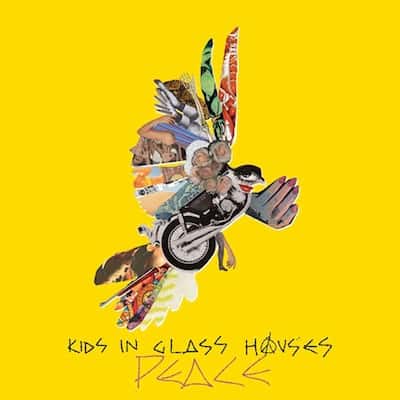 Bang. The opening track, also the title track, begins in medias res, with a fast yet building orchestration, the bass, drums and electronics the skeleton of the song, the chords and higher pitched guitar tones the flesh when the addictive chorus kicks in. Ahh! You can just tell which songs are gonna get the crowds singing en masse at the gigs the second their choruses blare. ‘Peace’ (album!) is full of those songs. This band have a knack for creating gentle catchiness that you only need to hear once before you’re fully acquainted with it. ‘Drive’ is another of those, except with more of that emotive power, Aled Philips’ talented high register laying it on thick. If there is one track that doesn’t do much for us, it’s ‘Set Me Free’, but only because it crosses into that, err, charty sound, and seen as we are one with the underground, living in squalor and darkness with the rats, that kind of tone naturally bounces off of us in repulsion. Two things are to be known though, one: it’s still a good song, and two: this listener is a hypocrite, because ‘Novocaine’ hits the melody perfectly, and this track has a similar vibe. To put it bluntly and obviously, this band has a lot of influences feeding in.

Another that has a lot going on is ‘Runaways’, which strikes you again and again with note after note of joyful melody, especially in the chorus. With each note Philips takes you to another level, and ‘Black Cloud’ has the same story.

Is there much else to say? Well honestly, no there isn’t. Every track is a strong, concise structure showcasing some serious talent. They might not be one of the most original bands in the world, or have breathtaking riffs, but they sure know how to put a decent song together. This is one we’re going to enjoy after the storm has passed. Last one to the river’s a twat!