This isn’t an album for those who are easily offended, squeamish, or particularly prudish. If song titles including “Golden Shower”, “Fat” and “Ladyboy” put you off, you probably shouldn’t listen to it. Many fans of Rammstein have never bothered to look up the translation for their lyrics, but those who have know that this kind of theme isn’t new for Till – it’s just easier to ignore when it’s in German. 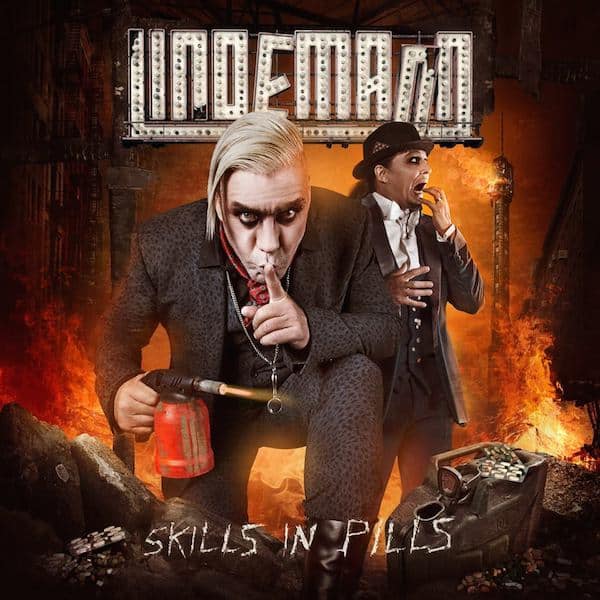 ‘Skills In Pills’ is the perfect starting track with its dance-inducing synths (seriously, it’s impossible not to dance to this song). According to an interview with Till, the title is a reference to his days back in East Germany when alcohol was illegal and to get high they had to mix together different prescription drugs. You needed “skills” to be able to do this though, as if you got it wrong you’d end up with some pretty serious brain damage. Actually, that explains a lot.

In tone, the song is pure industrial but with elements of the pop-synth side of the genre. It’s got its catchy synths, its heavy breakdown and Till’s heartbreakingly beautiful voice belting out with such passion – it works really, really well.
The next song ‘Ladyboy’ is lyrically almost the same as ‘Zwitter’ – just about another person.

For those who aren’t familiar, “Zwitter” means “hermaphrodite”, and the song is about how happy he feels to be both genders with such great jokes as “I’m not offended when you tell me to go fuck myself”. Similarly in ‘Ladyboy’ he sings about a passionate love for his ladyboy lover, in what is actually a really beautiful way – combined with the fury of not being able to express his love when he growls out “Why should I laugh when I can’t have fun with my ‘Ladyboy’?” This was the first song the duo wrote, and came from the German-speaking Till trying to explain his feelings about the subject to the Swedish/American Tägtgren – English was the only language they both knew, however little.

Lindemann aren’t going to win any LGBTQ awards or anything, but this theme of open-minded acceptance is prevalent on the album. ‘Fat’, which could have been an insulting song, is actually a roaring dance industrial number about a man’s passion for heavily overweight women. It’s grotesque, and goes against the messages we are always taught about what is beautiful, but what it stands for is really beautiful. He’s explained in interviews that he’s admired by men who have a fetish for overweight women, who can see beauty where they’ve been told they shouldn’t. When Till shouts “fat!” it’s with passion, not disgust. Complimenting these lyrics with tense violin music, church organs and heavy industrial beats gives you a real headbanger of a song, with a fantastic anthemic element.

Before you go ahead thinking that Till Lindemann is some kind of fetishistic sex pest, remember kids – songs don’t always have to be autobiographical! Till himself has noted in an interview that he enjoys getting inside the minds of others, finding what they want and hate – although to be fair, he also said that he wouldn’t object to an overweight groupie approaching him.
Ladyboy has the same kind of classic industrial breakdown that appears later in the form of ‘Praise Abort’, the album’s single. Praise Abort is a clear leading single – it’s industrial-metal enough that it could be one of Rammstein’s stranger songs (think ‘Pussy’ or ‘Amerika’) but also has an excellent tongue-in-cheek electronic element.

Songs like ‘Fish On’, ‘Cowboy’ and ‘Golden Shower’ are just insanely fun. The first begins with a strong electronic dance vibe and is a ridiculous and slightly gross kind of a song – the lyrics are pure Till, while the tune is clearly a result of Tägtgren’s experience with electronic-industrial. The crude sexual imagery is hilarious, and the ethereal female singing adds wonderful juxtaposition to it all. Whereas ‘Cowboy’, one of the first leaked songs of the album, is an undeniable hit as it’s just such good fun to dance to!
The lyrics for Cowboy are based on that childhood dream to be a cowboy (you could also insert fireman, astronaut or monster, in my experience) – with perhaps a little cynical jibe at America for good measure – and the failure of not living up to that dream. It’s funny, sexual, and once you know the lyrics it’s surprisingly hard not to sing along; another song that would go down very well at a live show! Also, there’s a banjo interlude.

In the middle of the album it falls back to that real Rammstein feeling – slow, headbanging industrial with Till’s terribly creepy voice. In terms of tone, ‘Children Of The Sun’ and ‘Home Sweet Home’ are almost pure Neue Deutsche Härte, a very specific genre of music which covers bands such as Megaherz, Oomph!, Emigrate, Eisbrecher and – of course – Rammstein. It’s usually used to describe a heartfelt industrial-metal sound and on these songs in particular it’s much more pronounced than on most of the album.

These songs are also gentle reminders that Till Lindemann is a poet at heart, and ‘Home Sweet Home’ is especially emotive. Like Nebel, it’s the kind of song that makes you feel nostalgic and homesick, with just a touch of hope or, at least, a glimmer of happiness in the memory, and it’s almost certainly appreciated best with your eyes shut. ‘Home Sweet Home’ could easily be a Rammstein song, although it would be wrong to diminish Tägtgren’s influence and incredible production skills.

‘Golden Shower’ particularly shows off Tägtgren’s style, starting slowly and dramatically before suddenly launching into some fairly serious metal – it especially feels like his death metal influences are coming through here. The lyrics to the song are disgusting – I won’t go into details as I’m sure you can guess – but if it were in German instead of English, the singing would probably sound something like ‘Du Riechst So Gut’. He also makes prolific use of the c-word, which is bound to put off a few people because trust me, you’ll be shouting it along with him after a listen or two. The music veers between heavy metal and electronica with that driving industrial drumbeat backing it along the way.

‘Yukon’ harkens back to that same Neue Deutsche Härte style but with an 80s goth-pop synth that turns the catchy tune into something reminiscent of Gary Numan or Depeche Mode. ‘Yukon’ is the name of a major river running through British Columbia, ‘Yukon’ and ‘Alaska’ that was the site of a mass prospector migration – hence “I want your gold but you want my life.” It was the last great gold rush, and of the 100,000 stampeders only around 30 – 40,000 made it, while the others died or gave up and turned back. It seems to be really about the unstoppable power of river, although he certainly ascribes the river female attributes.
Fun fact: while most people accept that the source of the ‘Yukon’ is the Llewellyn Glacier in British Columbia, others believe it to come from Lake Lindeman. Coincidence? I think so!

‘Praise Abort’ has been mentioned in passing, but it deserves a full explanation. There’s a very good reason why this was the lead single of the album – it’s probably the best song on the album (not accounting for personal taste), especially at first listen. If you couldn’t tell from the song title, it’s not going to be for everyone, and apparently the band have a crew of lawyers on hand just waiting for someone to kick off about it. Also, like ‘Golden Shower’, you will find yourself gleefully shouting “p-p-p-praise abort!” when Till does, so watch for that in public.

It’s a great mix of music though – pop-industrial synths interspersed with heavy chugging industrial guitars and a weirdly groovy tone running underneath every hate-filled word that spills from Till’s mouth. Later on in the breakdown we get a haunting female backing track to compliment Till’s gravel-like growling. Again, this song isn’t autobiographical, and his two children are okay with it! The video is also something pretty special – pregnant ballerinas and Till doing the moonwalk are just two especially good bits.
So, to sum up: Till Lindemann can do virtually anything and make it beautiful, and it seems like he’s met a musical match in Peter Tägtgren. It may not be Rammstein (who are incidentally starting to work on another album this year – hooray!) but it’s not meant to be. It’s a thoroughly interesting experiment that came about as a result of two incredibly strange men wanting to make bizarre music together, and it’s a masterpiece.