Album Review: Mastodon – ‘Once More ‘Round the Sun’

Mastodon, for my money, has always stood as one of the few truly exciting metal bands of the 2000s. Since their first release in 2002 – the skull-shatteringly sludgy ‘Remission’ – they have constantly evolved, revealing new layers to their collective imagination and musicianship and providing the faithful fan with some pleasant surprises. 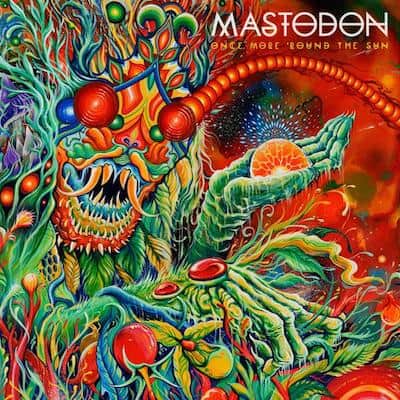 Their last album, 2011’s ‘The Hunter’, was filled with more hooky guitar riffs, clear vocals and straight-arrow song structures than usual, yet it felt like a natural progression; a band dispensing with some of their usual complexities, letting their hair down and just rocking out. The result was a record that showed off some of Mastodon’s more pop-ready sensibilities, with an airier, looser feel than usual, while still retaining enough of Bill Kelliher and Brent Hinds’ crushing riffs, and Brann Dailor’s frenetic drumming, to unmistakably be ‘them’.

On ‘Once More ‘Round the Sun’, Mastodon move even further away from the distorted heaviness of their earlier work and draw increasingly obvious influence from melodic pop hooks and the grandiosity of 70s prog rock. And while this makes for an album that builds quite naturally from the super-heavy pop leanings of the previous record, the song quality lacks consistency. Whereas The Hunter had enough good ideas to sustain itself, and sway the scepticism of many Mastodon fans – who initially felt the changes in the band’s sound meant they were going to lose something special – ‘Once More ‘Round the Sun’ alternates between great and forgettable (sometimes in the same song) with the album’s occasional low points sticking out so badly only because they sit amongst moments of brilliance. The result is an album that, while enjoyable, is perhaps less memorable in the long run than anything Mastodon have done before.

The album shimmers to life with ‘Tread Lightly’, bassist/vocalist Troy Sanders’ voice sailing over anthemic waves of guitar. The song’s expansive, spacy vibe neatly sets up the tone of the rest of the album, with The Motherload’s Iron Maiden gallop and rousing chorus giving way to High Road, which was released as the album’s first single earlier this year (and is one of its real highlights, the chugging guitar and Sanders’ vocals on the verses calling to mind Houdini-era Melvins).

A sense of melancholy runs through the album, even while the guitars are at their most soaring and Sanders/Hinds/Dailor’s vocals at their clearest and most rousing. Chimes at Midnight opens with a sense of ethereal, ghostly yearning, and even when it then proceeds to batter the door down, Sanders howls lyrics such as “All my heroes/They’re all dead.” Producer Nick Raskulinecz gives the guitars a glittering sheen and the bass a throbbing low-end boom, nicely offset by Dailor’s crisp, precise drumming and the vocals, which are Mastodon at their most anthemic throughout.

However, the album does have its downsides. ‘Asleep In The Deep’ feels slightly listless aside from a huge chorus, and Feast Your Eyes is enjoyable enough when it’s on, but instantly forgettable when it’s not. The album’s closer, Diamond in the Witch House (which features vocals from Neurosis vocalist and frequent Mastodon collaborator Scott Kelly) never really takes off despite a promisingly sinister intro, and ends the album with something of a dull thud.

When weighed against the album’s high points, these feel all too much like filler that could have been reworked into something more interesting, maybe on a later album. As it stands, ‘Once More ‘Round The Sun’ is a solid listen, and its more accessible sound may well make Mastodon a lot of new fans as they move ever onward into further uncharted territory.

mastadon reviewOnce more around the sun