Album Review: Melvins – ‘Hold It In’

Proving themselves yet again to be one of the hardest-working, most prolific bands around, Melvins return with their twenty-fourth studio album just a year after the great ‘Tres Cabrones’. Melvins tradition of melding together various musical styles and going off on weird tangents, never running in place, holds as true as ever; the album lurches pleasingly from metal to psychedelic-tinged pop, taking a couple of detours into murky noise rock along the way. 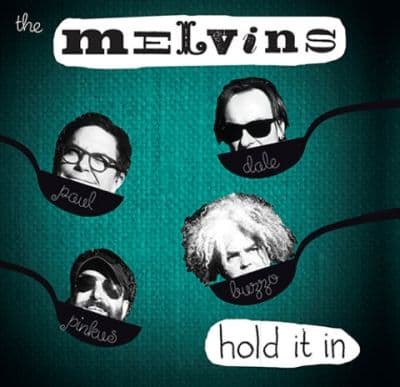 The addition of Butthole Surfers members Paul Leary (guitar/vocals) and JD Pinkus (bass) is a good one. Melvins frontman Buzz Osborne has said that he essentially wrote some songs here with gaps in, for Leary in particular to fill in, however he liked. This writing style has paid off very well; the Surfers and Melvins have always had certain shared sensibilities (a strange, macabre sense of humour, first and foremost), and the fit here feels entirely natural.

Not that this is some ‘Melvins and friends’ side-project; it’s a full-on Melvins album. Songs such as ‘Bride of Crankenstein’ and ‘Onions Make the Milk Taste Bad’ feature classic Osborne riffing; tight, frenetic and jagged. The album’s poppier tracks – for example, the bright, bouncing ‘Brass Cupcake’ and the catchy rock ‘n’ roll of ‘Eyes On You’ – provide some variety and are entertaining listens. It’s testament to the band that their personality filters through enough that these moments of levity can sit alongside heavier stuff without any of it feeling out of place.

‘Hold It In’ doesn’t feel quite as memorable as Melvins’ best work, although considering the sheer amount of stuff they’ve put out over the years, and the (generally) very high quality of their back-catalogue, putting out a twenty-fourth album which is just “good” rather than “great” is still something to be happy about.