Mike Doughty’s reimagining of his ex-band Soul Coughing’s greatest hits is an energetic, diverse collection of essentially completely different tracks. Before this gets into full swing it’s worth paying respect where it’s due. The originals are very good in their own way. They are atmospheric, methodical, unique, very subjective. ‘Circles, Super Bon Bon…’ on the other hand takes the structure, lyrics and meanings and amps them up ten fold, filling that void where the originals let the atmosphere alone ring out and suck the listener in. Each track is more concise, bursting with enthusiasm, and end before they outstay their welcome. The bitterness surrounding Doughty’s decision put this album together is not of the essence. In each case, both versions are strong. Don’t like one? It’s worth checking out the other. You might just have your mind opened. 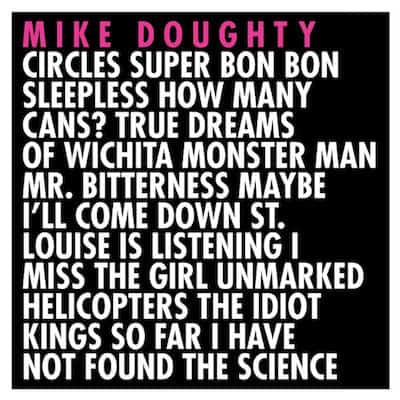 The sounds are simple, often times you will just hear a bass line and Doughty’s smooth vocals. Take ‘Super Bon Bon…’. It’s got groove, style, and subtle touches that enhance the mood, chilling you out before the chorus kicks in and gets your head moving. A couple of listens and you get to know it pretty well, and start singing along hip-hop style. ‘Sleepless’ is another with that instant energy that makes this album so addictive. The electronics compliment the melody of the vocals, while maintaining a hell of a pace. “I got the will to drive myself sleepless…”

The way he lets that final word hang in the air time and time again never loses its charm. Straight after, the fast electronic beat of ‘How Many Cans’ takes you down a different avenue, and then it slows down again with ‘True Dreams Of Wichita’, this writer’s personal highlight. Here, the bass and beat go together perfectly, while Doughty’s voice takes the wheel. The chorus is ridiculously catchy. Hear it once and you’ll be humming it all day.

It’s a welcome change to hear some acoustics in the narrative feeling of ‘Mr Bitterness’. Gather round the fire, everyone, it’s time for a story! A sad relatable one. And like the others, it’s over all too soon. Then, clean electric guitars and acoustics change it up in ‘The Idiot Kings’. The chorus of this one is just fantastic. At its peak, Doughty doesn’t even need to use lyrics. He just needs to hum a bit and then…damn, addictive melody right there!

‘Unmarked Helicopters’ is the album at its quickest, and after that it loses its touch. ‘I Miss The Girl’ has an ugly twanging as the main musical background, and it takes the appeal away from a potentially enthralling track. Luckily, ‘Circles’ brings it back with more melody and catchiness, and ‘St Louise is Listening’ follows in kind, but is noticeably repetitive, with little enhancement of anything, and ‘Monster Man’ brings it back to basics, but it just feels empty, and is an unsatisfying end to an album that starts strongly.

The album as a whole is plenty diverse, but the songs individually often don’t change much, but considering it, that’s what makes these songs so bloody strange. They sound familiar, and yet you get to the end of one and you can’t believe what you’ve heard. It’s to a lesser extent than Soul Coughing’s stuff, but still has an indefinable uniqueness that is a testament to Doughty’s song writing abilities.