Album Review: Morrissey – ‘World Peace Is None of Your Business’

‘’Most pop stars have to be dead before they achieve the iconic status that Morrissey has reached in his lifetime’’. That’s a bold statement that sparks a debate that would still be simmering tomorrow morning. However, few can deny that the flower swinging lothario is a special man, a man who spits in your eye if you ask him why, a man with nothing to prove. But no. This is a man with a very suspiciously Johnny Marr shaped chip on his shoulder, and in his own mind he still has everything to prove. 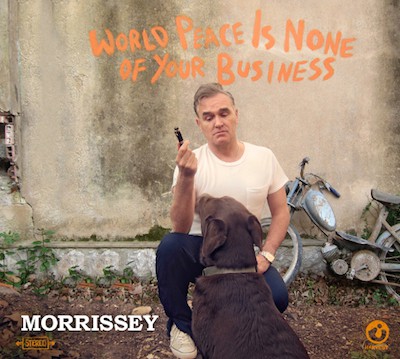 The title track begins with a stuffy and tribal sounding pounding African drum, which for a split second makes you wonder if maybe this time, the boat has been pushed out too far. Maybe this is just too pretentious, even for Morrissey. But before you can garner any real worry, the jungle is scythed down by trademark dazzlingly dreamy guitar and the unmistakable Mancunian vocal attack that has made him a household name.

For a man that has a face like out of date milk in every photograph of him that exists, his wit is almost dangerously dry. ‘’Allen Ginsberg’s tears shampoo his beard’’ is a line that is so Morrissey it sings on its knees and fights for animal rights. This isn’t the only Morrissey stereotype buried within this album. ‘I’m Not a Man’ is a 7-minute Miles Davis solo on his own trumpet. ‘’I’m something much bigger and better’’ is crooned over warring synths and is just audible to us here mere mortals on planet earth.

Back on planet Moz, he marches into the beautifully bass orientated bulldozer that is ‘Istanbul’. This is one of the albums peaks, the tender lyrics about a man identifying his son’s dead body act as sombre snow on the peak, but the classic cheery melody offset with dark lyrics works perfectly to make a gorgeous musical moment. The song itself fades into the achingly superb Spanish guitar soaked metropolis that is ‘Earth is the Loneliest Planet’. Frantic drums shake hands with lightning fast sweeps down piano keys to drench the song with passion.

‘Staircase At the University’ is a harrowing but disturbingly accurate tale of a girl who commits suicide due to the expectancy piled onto her shoulders, which paints a very real portrait of the pressures forced upon young people by their pushy parents. Then, no sooner has the flamenco flame died before it’s fanned by a coach tour of Spanish cities marvellously led by Captain Morrissey on ‘The Bullfighter Dies’.

Next up ‘Kiss Me A Lot’ is such a simple, sultry love song, it works perfectly. It’s a huge bay window looking onto the machinations of Morrissey’s heart that sadly acts as a fantastic pre-cursor to an unfortunate lull. ‘Smiler With Knife’ wears a Velvet Underground drone, but it’s a few sizes too big. Morrissey’s voice can’t add enough energy to the song to stop it being the album’s first disappointment.

Thankfully, it’s the only disappointment. ‘Kick The Bride Down The Aisle’ is a similarly paced song that is elevated to Morrissey’s own high standards by quick thinking wit, a smart rhyme scheme and theatrical guitars. Succeeded by the precious acoustic strums of ‘Mountjoy’, the album fights back with a song that snowballs towards a staggering finale.

The album is brought to an assuasive end by the otherworldly ‘Oboe Concerto’. It’s a sedative song which sees a waltzing bass line lie on a bed of hypnotic tambourine, snuggled under Morrissey’s trademark roll of the tongue.

This is a near-perfect album. It’s dreamy, confrontational, sad and triumphant all wrapped up with a bow tied by a genius. It shatters any theories that Morrissey isn’t a solo artist and was only lifted to great musical heights by the jangling Johnny Marr. Morrissey is the first of the gang with a gun in his hand, and it’s pointed at anyone who would dare try to steal his crown as the most talented songwriter of a generation.

MorrisseyWorld Peace Is None of Your Business