“We’re Motorhead and we play rock n roll” – They’re back with aplomb. Their classic short, fast, loud sound tears through ‘Aftershock’, their latest 14-track offering, which boasts ripper guitar solos from Phil Campbell, the hard-hitting percussion of Micky Dee and of course, the boiled nail-esque throaty vocals of the legendary Lemmy Kilmister – all the nerve-tingling attributes that have, and will continue to, define generations of rock musicians. 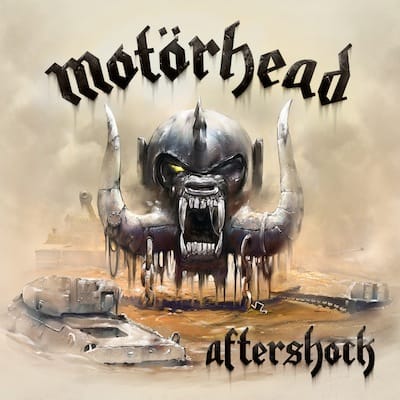 Lemmy may be 67-years-old but Aftershock proves he’s still got it, as songs such as ‘End Of Time’ possess heaps of classically-engineered grooves and plenty of pace for good measure – like good old timeless tracks in the shape of ‘Iron Fist’. If it’s not broken don’t fix it! And let’s face it; Lemmy isn’t going to dial in a different sound for the sake of it, as many record labels down the line have found out…the hard way.

Consequently, the album is a timely break from the modern day hard rock and metal bands who rely all too heavily upon the same Pro-tools samples to craft a sound that has already been achieved by other bands elsewhere. Anyway, back to the real stuff.

‘Queen Of The Damned” and ‘Going To Mexico’ add even more impetus to the band’s definitive sound and live fast, die young approach, which if gauged would certainly be hitting the million miles per hour mark.

‘Aftershock’, however, isn’t just about percussion-wreckingly-hard beats and punk-fuelled speed riffs that are ‘louder than everyone else’. This album ebbs and flows with softer less-is-more bluesy numbers like ‘Dust And Glass’ and ‘Lost Woman Blues’. And they’re the kind of tunes that you could imagine being played in the background of smoke-filled Los Angeles bars over a few nips of Jack, the very sort of establishments that you’d find Lemmy whiling away in when the band aren’t ripping up stages worldwide.

The simple yet catchy style is what really helps you get hooked into their 21st studio album. On reflection, it isn’t their most definitive offering, but let’s face it, it will take a hell of a lot to beat ‘Ace Of Spades’. And unfortunately there’s the odd repetitive riff here and there but it’s certainly not enough to deter you from listening to ‘Aftershock’. So, sit back, turn your stereo up to 11 and enjoy some good, honest rock’ n’ roll-the way it’s meant to be. We certainly can’t wait to hear these new songs performed live alongside the classics this winter!