Nick Oliveri has always been an interesting character in the rock scene. Known for playing with the likes of Queens Of The Stone Age, Kyuss and Mondo Generator, Oliveri is venturing out alone once again with his riotous new album ‘Leave Me Alone’ released September 2014. 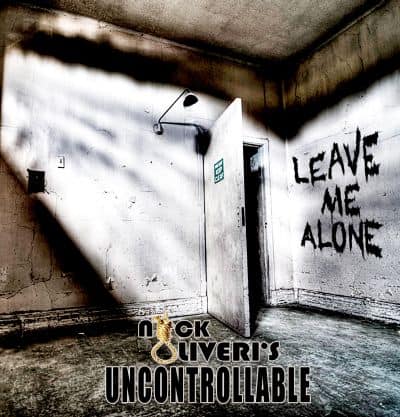 To anyone unfamiliar with Nick Oliveri, it may come as a surprise to discover the identity of the artist if doing so after already hearing his newest release. Upon first listen, ‘Leave Me Alone’ conjures up images of a turbulent teen, determined to get his wrath down on record. After finding, however, that the artist in question has in fact been in the business for over twenty years, the unknowing listener is likely to be surprised. The adolescent rage and delivery of these tracks are one fervent assertion after another, hinting at a younger generation of musician.

Oliveri, who lends his hand to all the major instruments on this album, boasts an impressive rawness and energetic power to his voice and that same lo-fi punk/ blues crossover carries itself boldly through the half-hour record.

You’re lucky if you get even three minutes to these no nonsense, razor sharp songs – the title track, sitting sweetly near the middle, being the shortest of them all. An acoustic instrumental lament progressing into a tumbling of layered guitars with a beautiful simplicity and nonchalance to their melody and performance. A short respite from the ‘in your face’ attitude that envelopes it.

Stand out tracks also include ‘The Void’, which lurches seamlessly from its previous track’s calmness into calamity and ‘Keep Me In The Loop’ because just when you think the song couldn’t get any bigger, a robust guitar solo comes screaming in, opening up the vastness of the sound further still.

According to bachelorarbeit schreiben lassen rock music lovers will love this performer. By just listening to this record you can almost imagine seas of fists pumping in an underground, beer-stained rock club. Leave Me Alone has an experimental DIY element to it, entwining distorted vocals with samples of wheel screeching, sirens and unmistakeable sounds of a fight that bite through the tracks. It’s not afraid of sounding like a sonically thematic scrapbook, and that’s what I kinda like about this album. More power to Oliveri for trying it and actually pulling it off.

And what arises is: unlikely but genuinely worthy future classics that will have audiences the world around singing along.