Nine Black Alps are an alt-rock band with their roots firmly and proudly planted in Manchester. They have eleven years under their belt and their newest album ‘Candy For The Clown’ is being released 21st April. Though it’s an enjoyable listen, it lacks the grit and energy their last album ‘Sirens’ flourished on. The tracks are very similar, which gives the album coherence and makes it whole, but by its finish you might feel like you’ve accidentally kept the repeat button pressed in. 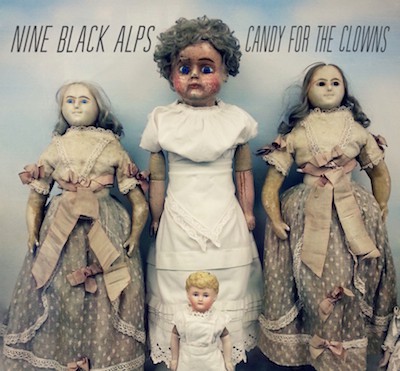 ‘Novokaine’ uses layering of instruments that aren’t quite in time with each other, but it works. They have a darkly psychedelic style that is complimented by lead singer Sam Forrest’s gravelly vocals. This is followed by ‘Blackout’ – slick, suave and captivating without losing its coolness; like a grunge rocker in a suit. ‘Supermarket Clothes’ is more upbeat and was our definite favourite. It was catchier and less try-hard than most other tracks. ‘Patti’ includes dramatic pauses and a great use of the whammy bar in the lingering notes that layer over each other to give depth and meatiness to their sound, more like their older material. ‘Something Else’ is progress for the album with excellently rhythmical guitars and powerful drums which make this a much more engaging song.

In ‘Morning After’ the vocals are showcased so well, the best they are in ‘Candy For The Clown’. ‘Come Back Around’ and ‘Destroy Me’ are songs that are nothing special and don’t stand out. Both feature a guitar solo that, while decent, sounds the same in every other song. ‘Not In My Name’ is a heavier and well written song. ‘Take Me Underground’ has a slower tempo and a softer sound and is skilfully melodic and relaxing. Final track ‘Clown’ is a heavy, gritty, unusual blend of indie rock and more traditional rock. It has a catchy guitar riff and unique and meaningful lyrics.

This record is accessible and it’s easy to slip into this laid-back rock but it doesn’t pack a big enough punch to make this album a truly stand-out piece. Nine Black Alps try to be cool and edgy a little too hard, but have an ‘I don’t care’ attitude that translates well into their songs. However, some songs miss the point and become slightly bland. There are enjoyable songs but most seem to miss the point; the more upbeat songs don’t have any power behind them and the darker songs aren’t heavy enough.

‘Candy For The Clown’ won’t have you energetically head-banging along, but it would be a good record to play one lazy Sunday afternoon. Perhaps not what the band were going for.

candy for the clownsNine Black Alps