Rise Against is a band that has garnered a lot of critics throughout the years from publications and fans alike for their political and at times anti-American messages with people claiming that they have strained from their roots as a fast and loud Chicago punk band and become another preachy rock band. Well those people need to give the band’s latest release ‘Rise Against: Long Forgotten Songs: B-Sides & Covers 2000-2013’ a listen. Not the catchiest title, but definitely descriptive. 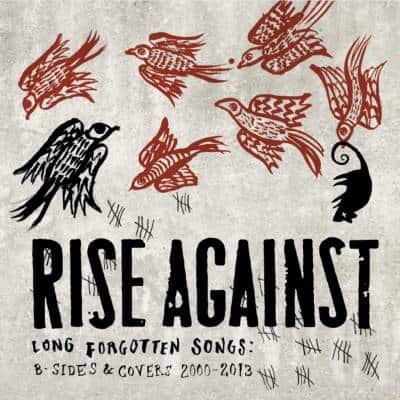 We’ve always loved Rise Against, but this album reignited the flame for us, making us just want to go back and listen to all of the band’s past albums. One main contributing factor to our love of this album is that it includes all of our favorite classics from the band such as a more raw version of the ever popular ‘Give It All’ along with bonus tracks like ‘Historia Calamitatum’ which kicks off the album in true Rise Against fashion; fast and angry.

The album continues with the powerful ‘Death Blossoms’, an exclusive download from Guitar Hero, followed by the poignant ‘Elective Amnesia’, a bonus track from ‘Appeal to Reason’ and the hard rocking ‘Grammatizator’, a track released as a single after the band lost a bet to NOFX frontman and Fat Wreck Chords chairman Fat Mike. This power trio of original songs had us mesmerized and craving more kickass punk tracks from the band, but of course in true Rise Against fashion we were thrown through a loop by track five of the album, a cover of Face To Face’s poppy and affectionate song ‘Blind’.

This is one of the many reasons why we enjoyed this album so much; just when you think you know where the album is going a brick wall emerges amongst the electrifying guitar solos from Zach Blair, commanding vocals of Tim McIlrath, tight drums from Brandon Barnes and intricate bass lines from Joe Principe. Scattered throughout the heated and allusive Rise Against tracks that take us through the band’s over ten year journey of their albums are some unanticipated covers.

We’d like to say that we were surprised with how fantastic the band’s rendition of Bob Dylan’s ‘Ballad Of Hollis Brown’ is, but we wouldn’t expect anything less from Rise Against. While the band is known for their fast paced punk and anti-establishment style this skilled group of musicians can seem to do justice to any genre. The folk ballad is given a hard rock twist while still keeping it’s nostalgic sixties feel with haunting guitar solos and enticing drums all fortified by McIlrath’s intensive vocals.

With classic covers from other punk and hardcore bands such as Minor Threat, Black Flag, Lifetime and Sick of it All this album has what we found to be the perfect balance of the band’s influences and more contrasting artists and tracks such as Malvina Reynolds’ ‘Little Boxes’ which was given a hardcore twist that we couldn’t have possibly loved any more. We couldn’t have asked for a better ending to the album than a live cover of Bruce Springsteen’s ‘The Ghost of Tom Joad’ featuring MC5’s Wayne Kramer, Brian Fallon of The Gaslight Anthem and legendary Rage Against The Machine guitarist, Tom Morello. This super-group performance delivers an exceptional version of this song.

If this album proves anything it’s that the changes that Rise Against have gone through as a band throughout the years have only made them more unforgettable. From grunge to folk covers, acoustic to heavy rocking original tracks. This album encompasses everything we love about Rise Against while taking us on a musical history lesson of not only the band’s past, but some classic songs and artists that are too often overlooked.

rise against interview 2013Rise Against: Long Forgotten Songs: B Sides and Covers 2000-2013 review