Album Review: The Pack AD – ‘Do Not Engage’

Home » Album Review: The Pack AD – ‘Do Not Engage’

Whoever said that more was merrier? Canadian garage rock duo The Pack AD once more confront senseless stereotypes with a no nonsense album deceptively titled ‘Do Not Engage’. Pure cut and powerful, the album proves yet again that in the music industry’s seething crush of auto tune and mix matched genres, raw rock, hewn from two garage rockers’ innovation and ability, will forever hold a special place in the minds of the many. Fully capable of slicing through over production and studio experimentation, Do Not Engage dives straight into the devoted arms of an all too receptive audience, looking for sounds from the soul, without the pretence. 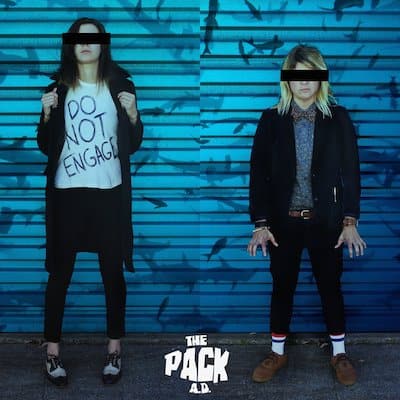 Bursting with flavour straight for the get go, opener ‘Airborne’ blows the lid off the album with a cannon fire pounding. Severing convention and leading with a firecracker of first track, The Pack AD kick off with a gem; ever enticing and sure to deliver it’s a masterpiece that reaps the rewards of daring to fly the bands true colours in a no holds barred opener. ‘Reigning In Black’s melancholy brooding, hints of a hidden vulnerability are dropped and smothered in passionate percussion and gorgeously viscid distortion, oozing out from the vault of grunge rock righteousness.

‘Big Shot’ does exactly what it says on the tin, punching out rock to its core, it’s a blow to a system conditioned to the sweetly naive rhythms of chart music and its cheery counterparts. The functioning flagship of the album as a whole, ‘Big Shot’ throws ‘Do Not Engage’ onto the offensive; a fragmented wonderment twining choruses so spaced out they kiss the stars with a pop-punk shock verse, a rock and roll cocktail lathered in The Pack AD’s trademark dance rock garage grunge that begs to see you jump with pick and stick.

Fierce and feral as the title suggests ‘Animal’ catches the budding rock enthusiast reeling; untethered and untamed this track bristles, an instrumental arsenal unlike anything yet. Drums resound as guitar wizardry climbs ever higher into the euphoric states of solo ecstasy, before long the chorus drips off the tongue, rich in flavour and sickeningly catchy but it’s the tools of the trade doing all the talking, an intricate web of verse, chorus, bridge and big beat breakdowns keep the listener guessing whilst oohs and aahs bring texture to a mix founded in repetitive, bass heavy riffs that just keep on giving.

In the same way that the vocals straddle frontal assault with dreamy serenity, so too does the album as a whole. Maverick track ‘Loser’ arrives like calm after the storm, a chance to scrape your jaw back off the floor as jackhammer guitar jams linger in their persistently admirable reverberations, this one throws the spotlight firmly onto the vocals. Something akin to sensitivity crawls across the sound waves carried with an under foreseen gentility by tender guitar melodies, a siren’s call in the beauty of a tempestuous album. Along with closer ‘Needles’ The Pack AD prove their soul sound credentials with glazy eyed tunes, instilled with heart bled emotion that could crack a tearful sway out of even the most grizzled garage rock veteran.

The album plays like a guitar riff land slide, set free to defy expectations and satisfy rock and roll cravings the world over. Maya Miller’s drumming lends a solid foundation of cosmopolitan crash rhythms constructing a lifeline of consistency for the listener to cling to whilst the deceptively calm avalanche that is the vocals of Becky Black rages past. But it works. An instant classic and a cracking album, for the fans of back to basics, those that remember the good old days, or the modern music junkie Do Not Engage offers a testament to distortion itself.

do not engagethe pack ad