Bringing us our ever so needed daily dosage of rock is Los Angeles based band, We Are Harlot with their self-titled debut album, ‘We are Harlot’. Due to be released on March 30, the harder-edged foursome have presented us with 11 energising tracks that are sure to keep our heads nodding and feet tapping. 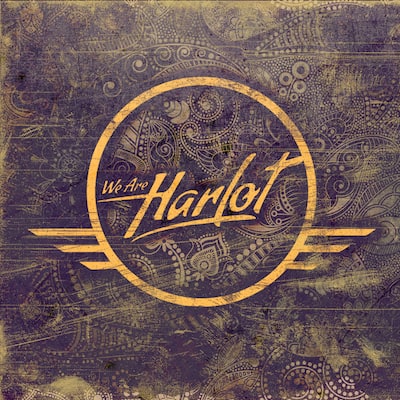 With the controversial ex-AA frontman, Danny Worsnop on lead vocals, Jeff George on guitar, Brian Weaver on bass and Bruno Agra on drums, the four rock stars (in Hollywood terms) merge together beautifully to create the perfect sound for all hard music enthusiasts.

Opening the album is an explosion of chemistry with ‘Dancing On Nails’. For the anti-rockers out there, this number would literally be like dancing on nails. For us head-bangers however, it is a rocking dream; the perfect way to introduce an album. The fast beat and strong focus of George’s guitar with a spine tingling solo ticks all the boxes for an exciting and powerful track. In addition, Danny Worsnop’s intense and electrifying vocals go arm in arm with the hurried pace of the track.

The joint use of vocals and quick beats are relied upon strongly throughout the album, in particular tracks such as ‘Dirty Little Thing’, ‘One More Night’, ‘Never Turn Back’ and ‘Flying too close to the sun’. Harlot lean towards the doorstep of heavy rock/metal with intense vocals that consist of screaming keys; ideal in creating the live energy that the band have already successfully achieved.

In tracks ‘Denial’, ‘Easier To Leave’ and ‘Love For The Night’, the band have stirred it up a bit by adding piano riffs throughout. This touch of classical adds emphasis to the tracks, and stops the album from sounding exactly the same throughout which can be a big turn-off for some listeners. It also creates a melody which adds a hint of ‘nice-ness’, a rare specimen amongst usual hard rock numbers; a warm, well, maybe mild welcome to new listeners of Harlot.

Even though the album is generally a fast-paced whirlwind, the band know when to draw the fine line at becoming repetitive. Track number three, ‘Someday’ adopts a much slower pace, whilst still maintaining powerful drum beats and guitar riffs. The pace varies throughout, building up to heavier tones then gradually dying down to a calmer melody.

Likewise, finishing track ‘I Tried’ focuses on the slow beat, however diminishes the drums and relies upon soft guitar plucks with Worsnop’s signature vocal style. Classical backdrop with the use of violins creates a calm and emotional atmosphere, a beautiful way to end a beautifully energetic album.