3 Doors Down are a band that we are so glad got found, and when they got found, they got big. 3DD have released five multi-platinum albums and have (very deservingly) achieved global success, and their greatest hits album is set to hit the shops on November 19. 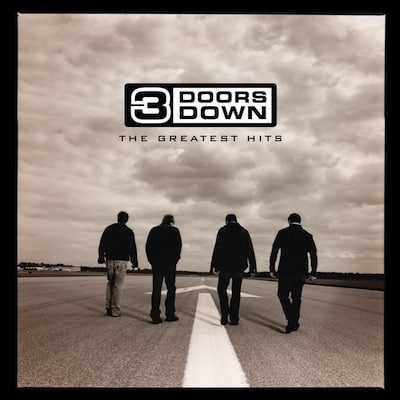 This album makes it very apparent that 3DD are one of the most hard-working bands of this century. It takes them almost three years every time to release a new album, which makes every album they’ve ever released pack a serious punch. Their greatest hits album is no exception; not only does it contain the greatest of their material, it also contains three brand new tunes. Value for money or what?

We don’t think it’s an over-exaggeration to say that ‘Kryptonite’ is literally one of the catchiest alternative rock songs ever written, and with it being 3DD’s first ever single, it’s a great song to start the album. ‘Let Me Go’ and ‘Here Without You’ will almost certainly identify with many lost souls out there, but will get us all singing along. Superb hi-hat tinkering in ‘Be Like That’ shows off excellent drumming skills. ‘Loser’, a personal favourite, boasts a brilliant interlude. It seems like it shouldn’t fit the song, and yet enhances it so much before putting goosebumps on your back as it almost transparently slips back into the main catchy chord riff. Meanwhile, ‘Duck And Run’ really shows their more grungy side, with a quite dark and haunting verse riff, which then turns a little more melodic, but equally as heavy for the chorus, and we also get a great guitar solo to see 3DD’s excellent technical skills.

A criticism of the album (which is hard to find) is that it does showcase how rigidly they stick to one way of song-writing despite their long experience. Nearly every song begins with a soft melodic guitar intro before kicking in with the bass and drums and then becoming distorted and heavy for the chorus. A very familiar song-writing framework may not be their best showcase of creativity, but hey! It works for them.

‘One light’ is the first of a trio of new songs added to the end of the album. This is a song that breaks the aforementioned rule. It is explosive right from start to end. Although not quite as catchy in my opinion as some of the other tracks, it still demonstrates that 3DD certainly do not have a lack of talent. ‘There’s A Life’ is the second new song featured on the album, which I am sad to say just does not do anything for me. It’s a little too middle of the road for the 3DD I’m used to. The final song on the album, aptly named ‘Goodbyes’, is the last of the new material. It’s a slow but heavy song, with great backing vocals and some really nice piano parts. A very well written song, and a perfect way to round off a great album.

Brad Arnold’s ultimate emotion-meets-rock vocals are perfect for this band’s rock sound. Their heavy but melodic riffs and epic song writing style appeal to millions around the globe. They have always been an intensive live band, sometimes playing more than 300 gigs in a year. The album is a must have for fans of 90s rock sounds; few bands deserve as much success as 3 Doors Down.