The anticipation on the metal scene has been brewing up a storm since Bullet For My Valentine singer Matt Tuck announced his intentions to form a new supergroup alongside lead vocalist of the Cancer Bats, Liam Cormier. 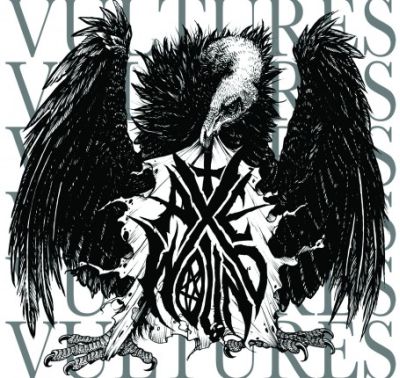 The pedigree of this band is unarguable: Mike Kingswood (Glamour Of The Kill) takes his well earned place on guitar whilst Jason Bowld (ex-Pitchshifter and Slaves To Gravity drummer extraordinaire) with Joe Copcutt, formerly of Rise To Remain fame pulling up the rhythm section of the band. Supergroups come with a lot of hype and it makes you think of a flash-in-the-fire projects that lack any lasting impetus, will Axewound be any different?

May 2012 saw the band tease the scene into submission with ‘Post Apocalyptic Party’ offered as a free download.  If this wasn’t enough the single release of ‘Cold’ earlier this month left fans eagerly awaiting October and a full album being unleashed.  Well the wait is almost over.

‘Fever’, the last Bullet For My Valentine release took a step back from the thrash content of ‘Scream, Aim, Fire’ taking them to the heady heights of an arena-filling metal band.  They suddenly held appeal to the radio listening masses with fast paced melodic metal, catchy hooks but ultimately inoffensive and lacking anything too challenging. ‘Vultures’ takes a step into the unknown, challenging in the best of ways with greater depth and a less predictable nature. It’s instantly apparent that the pack-a-punch metal passages were being stockpiled by Tuck for this record.

Comparable to the best in the genre, the metalcore pasts of the various members of this band are hugely evident but is complemented by something that is somehow heavier and darker.  Matt said that this album was going to be “…metal as f**k.  No holds barred,” to follow in the well-trodden footprints of acts like Slipknot and Pantera; these goals have been realised.

From the word go, initial track ‘Burn Alive’ delivers the catalyst for the rest of the album, a fast paced, heavy anthem complete with venomous riffs only complemented by hooks large enough to catch a killer whale.

Title track, ‘Vultures’ is a stomping offering with Synyster Gates of Avenged Sevenfold guest starring by throwing one of his trademark finger burning solos into the mix.  The powerful ballad-esque ‘Collide’ serves to illustrates that Tuck retain the melodic vocals and highly catchy lines for which he is fame and the crusading epic “Exochrist” showcases his innate talent whilst seemingly managing to drive a new path into power metal.

Whether this supergroup will stand the test of time could be questioned but for now this beast throws two fists in the air and offers a worthy fight: ultimately, a ball-grabber of an album.