If there’s one thing that’s usually as reliable as a German bus schedule, it’s the quality of a Bad Religion album.  For over 30 years the boys (or granddaddies of contemporary U.S. punk rather) have been pumping out albums that, for the most part, have received positive responses from fans and critics alike.  What better way, then, to begin the year with the sixteenth album from the LA stalwarts? 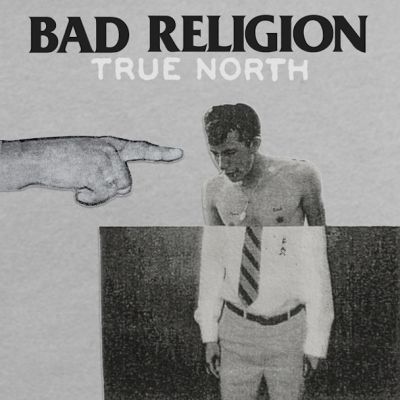 Let’s start things off with some critical honesty and state that this album isn’t going to convert anyone not previously enamoured with the band.  ‘True North’s’ strength is what could be viewed as its biggest weakness – this is the most Bad Religion sounding Bad Religion album ever released.  This may sound like a moronic statement but indulge me if you will and I shall explain my meaning, through the power of interpretive dance!… Okay no, I’ll just explain.  Maybe it’s to do with Gurewitz being back behind the production desk.  Maybe it’s the fact that, by the band’s own admission, there is a deliberate attempt to fuse their favourite elements of previous releases into one glorious package.  Maybe it’s the simple fact that they keep the pace blistering and that only one track here dares to breach the three minute mark.  The result is that this sounds like a greatest hits album, and possibly the strongest effort since ‘Process of Belief’.

The experimentation evident on ‘The Dissent Of Man’ is gone and, whilst the urge to try new things is always positive, ‘True North’ thrives on obsessively clinging to the signature Bad Religion sound. Everywhere springs; soaring three-part vocal harmonies, the signature buzzsaw guitars of Gurewitz, Hetson, and Baker, and Graffin’s vocals sound as confident as they ever have whilst he vents his political ire at us.

‘Land Of Endless Greed’ and ‘Robin Hood In Reverse’ are perfect examples of Graffin at his most indignant.  They are polemics which probe at the weakness apparent in a society where corruption is the rule and not the exception.  There is no simple politicising here.  These lyrics probe and question rather than simply point angry fingers upward to those in positions of authority.  From a man with a PhD – who is equally at home treading the boards of a stage as standing behind a lecture theatre lectern – perhaps we should expect such close critical attention paid to the lyrics anyhow, but it’s still something worthy of being acknowledged.  Of course this is Bad Religion though, and any fears that things might be turning a little too high brow can be quickly assuaged when the intellectually titled ‘F**K you’ clicks into place.

Both the aforementioned track and ‘Vanity’ sound like classic Bad Religion tunes which could have been equally at home on seminal album ‘Suffer’; and that will never be a bad thing for this reviewer! On the subject of ‘Suffer’ it is worth acknowledging that ‘The Island’ sounds remarkably similar to ‘Delirium of Disorder’, and some might find this sudden evocation of an album twenty five years old somewhat jarring.

I have heard a criticism levelled at ‘True North’ that ‘Hello Cruel World’ kills the pace of the album as it rears its slow-paced noggin right in the middle of proceedings.  The pace certainly drops here but, on a sixteen track album, this track is a necessary moment to allow the listener to catch breath.  Relentless pace is one thing but it becomes meaningless without something to counteract it.  How can we tell light if there is no dark?  How can we tell this album is faster than Tiger Woods on a promise if the gas isn’t eased up on at least for one track?

Bad Religion may not have many albums left in them and, in all honesty, one has the temptation to say “That’s enough guys, leave it to the new generation of snotty upstarts.”  But, then you hear the album and you’re reminded that there’s still life in these guys yet – maybe it’s good to have Bad Religion showing the army of bands they’ve inspired how it’s done.