An initial reaction to the name Celldweller might interpret it as some kind of prison reference, a personal demonstration of resistance to an oppressive otherworldly regime, but after listening to ‘Wish Upon A Blackstar’ it becomes apparent that Klayton, the being behind the name, probably wants to live inside a battery. The press release describes Celldweller as “personifying the sound of the iPod generation” which is a pretty accurate description because most of the tracks sound like someone skipping through their mp3 player frantically trying to find something to listen to while they wait for the number 32-bit bus. 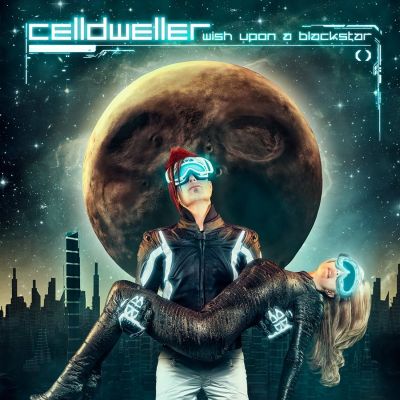 Opening track ‘The Arrival’ is 35 seconds of sweeping, synthetic sounds. ‘Unshakeable’ draws obvious influence from the Prodigy and Pendulum and pays them decent credit, but at times lacks the sonic power, the swaggering edge and most importantly, the hooks of both the genre heavyweights.

The title track ‘…Blackstar’ similarly struggles to forge a clear musical identity despite the dizzying array of digital and organic elements on display and the result is more europop than a pioneering musical form which is capable of deconstructing existing genre boundaries. It is the same story for ‘Eon’ and ‘Birthright’, both of which threaten to erupt into post-hardcore industrial aggression, but which inexplicably veer off course into mainstream electro-pop. That seems to be the whole point of the album though; to fuse the key elements of drum ‘n’ bass, dubstep and electro with those of rock and metal to create one multi-purpose product – a kind of one-size fits all electronic sound.

Such an objective would underline the claims that Celldweller “ignores genre boundaries” in his quest to become the architect of electronic music’s future. It is clearly a bold claim, and while there is nothing wrong with ambition, the album falls slightly short in establishing the solid launch-pad needed for Klayton’s manifesto because rather than transcending the diverse styles assembled here, ‘Wish Upon A Blackstar’ borrows from them all without demonstrating complete mastery over any of them. The sixteen tracks which comprise this release do try exceptionally hard, possibly too hard [to be fair, there is arguably nobody else trying this hard to err, mix it up a bit – editor’s note], to cover new ground and propel electronic music in new directions, but the result, in the end, is fragmented. If Celldweller genuinely aspires to become the architect of electronica’s future, then on this evidence, the process of hybridisation is in need of some refinement.