Clutch are not a band to cling to the past and their former image seeing that with every one of their nine studio albums they’ve moved forward organically with their fans.  Don’t compare them with the Clutch who released ‘Passive Restraints’ or ‘Transnational Speedway Anthems’, instead look to their natural evolution from being described as a funk metal blues act with their early releases, to their own labeled album ‘Strange Cousins From The West’ (2009) where we witnessed the move towards Southern rock styled grooves. 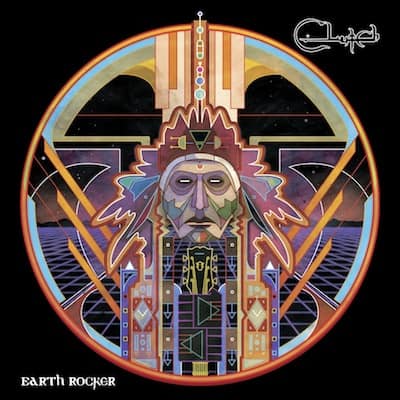 ‘Strange Cousins’ saw them stripped back, baring their souls and providing simplicity in sound.  Neil Fallon’s booming vocals took the driver’s seat on an album where Tim Sult’s trademark riff-monstery and axe swinging solos complement and pushed them forward as a truly innovative alternative rock band.

‘Earth Rocker’ takes the basics from ‘Strange Cousins’ and tears it back a little more; breaking any molds they’ve previously been typecast for and setting the bar high for making solid straight up rock and roll. Dan Maines (Bass) made a bold statement regarding the new album: “I think this record comes closer to really capturing that energy of Clutch live. It’s a very balanced album. There’s no B-side material. It’s an album of A-sides.”

Over-confident? Perhaps? Is there any truth in his statement?  Doubtlessly so! ‘Earth Rocker’ from the get-go is an album packing a punch with in-your-face riffs, high tempo beats and a certain conciseness that is at odds with their previous works. Filled to the brim with energy, catchy tunes and sing-a-long choruses, this is Clutch firing with all guns a’blazin’. The album opener breaks new ground with its auditory assault ‘Earth Rocker’, a statement of intent for the band and their performing behaviours. Proof that you are never too old to rock, this is a dirty bluesy number driven by the energy of Fallon’s gravelly vocals; a go hard or go home track, this is “balls-to-the-wall” (Fallon) streamlined rock at its best.

Uncompromising ‘Crucial Velocity’ is raucous and rowdy making it one of the album highlights. It hangs an offering on the altar of rock with a tip of the hat towards rock history and the first usage of distortion in a rock song, ‘Rocket 88’ (“My rocket 88 / fastest in the land / crucial Crucial Velocity”). Full pelt gritty rock showcasing Clutch in their prime.

‘Mr Freedom’ is both intoxicating and commanding whilst still containing an element of uplift – fret-frenzied guitar work from Tim Sult shows compelling concentration. ‘D.C. Sound Attack’ does exactly what it says on the tin, its cantering bluesy rhythms and lock tight drum styling from Jean-Paul (Gaster) offer a firm rhythm-heavy favourite.

‘Gone Cold’ is where ‘Earth Rocker’ takes a step away from the moonshine and into the breach of a slow-riding groove.It’s a muted ballad of a song which distinctively breaks up the mid-section of the album serving a temporary shift in the direction. ‘Unto the Breach’ and ‘Cyborg Bette’ are the musical bombardment which artfully and closely captures the on-stage energy of Clutch.

Thick and chunky bass sounds accompanied by delicate cowbell work, which serves only to accompany and not distract, syncopated rhythms, sermonizing vocals and endless guitar wizardry and bass work is simple elixir to the ears. It’s hard to picture listening to ‘Earth Rocker’ anywhere but on a whiskey-fuelled Saturday night in a smoke-filled bar. This is powerful funk as only Clutch know best. A grounding affirmation of every man’s music and ultimately recognition that this band are not yet done.