Thought you knew music? Watch your perceptions crumble to dust in front of you. Dissecting music limb by limb, stripping away all conventions, rules and expectations, is Concrete Lung, a subtly audacious two-piece band. Their atmospheric new EP ‘Subtract Nerve’ is a twisted, deformed, broken voice echoing off of crumbling dungeon walls, sinking into your subconscious and wrestling your mind into compliance. 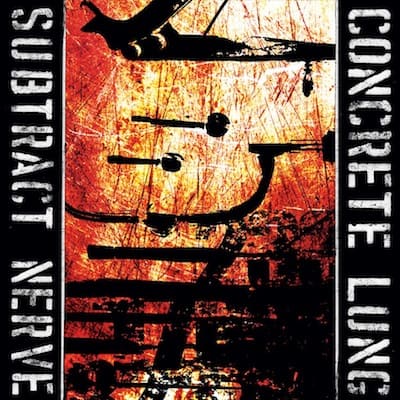 Upon first listen, you won’t believe what you’re hearing. You’ll recoil, taken aback by the disturbing guttural monotony that’s hitting you again and again. Then, as you submit to the fury of these beast-like songs, you’ll learn the twisted ways of the world you’ve entered, and become attached to it, as we have. This isn’t an EP to just put on in the background as you surf the web. Oh hell no. This steals your undivided attention. Everything that’s real fades away and you find yourself losing your sanity to a terrifying purgatory.

With the opening monster track ‘User’ you’re dragged into an eerie and encapsulating atmosphere. Whether you want to be or not, you’re mesmerized by the tame methodical aggression. It creeps up on you without your realisation or consent. With the second track you begin to move faster, the unknown dimension spiralling into the abyss around you. And then it just gets heavier. The title of the third track ‘Rot And Seethe’ is exactly what the band wants you to feel. The riff pounds relentlessly and furiously, pausing only for screeching feedback and unsettling electronic touches.

“Waste” is incredible. The inharmonious slam of guitar strings throughout grasps you and doesn’t let go. It’s a more straightforward song but in this writer’s opinion, is the most arresting track on the EP. And finally, ‘Flux’, which follows on in the same vein as its predecessor and delivers a different form of vocal style that projects those vital metal emotions in a more outward way, as opposed to the subtle menace burning furiously in the vocalist’s diaphragm that we hear throughout the rest. And what better way to end a disturbing experience like this but with an incredibly perturbing concoction of noises bordering on terrifying?

Stepping back from it, any other band you’re used to will seem like a far-off friendly dream. A comfort to make you sane again. That’s something that Concrete Lung should wear like a badge of honour. There’s nothing like this. Nothing at all. And that’s a damn good thing. This band are providing originality like never before, setting new hurdles for others to jump over. It’s one that simply needs to be experienced to be believed. The discomfort couldn’t be greater, and it will leave you questioning every musical paradigm you can think of.

It’s one for those of us who aren’t afraid to step out of reality – and suffer a few psychological scars as well.