Crystal Fighters promised that their return would see a progression from debut Star Of Love, and their second album ‘Cave Rave’ makes that progression, whilst delivering more sunny sounding tunes in a similar vein to the ones which put them on the map – just in time for the great British summer. 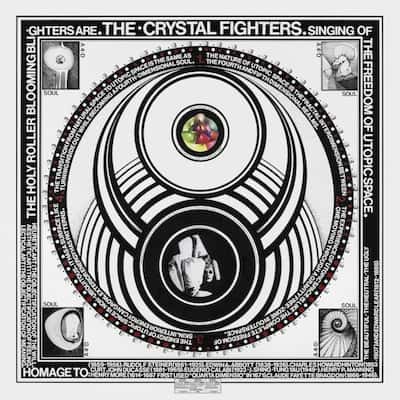 2010’s ‘Star Of Love’’s unique combination of electronic and folk was the sound of a young band trying something new. Their second studio album takes a leap in a different direction, with the band toning down much of their dance-driven side to concentrate on a more mature indie-pop sound.

Opener ‘Wave’ gives just enough of the old Crystal Fighters to lead fans into the rest of the record, whilst allowing everyone to leave any pre-formed thoughts about what to expect at the door, an upbeat indie-pop cracker in its own right with the chorus’s lead vocal melodies a recurring them on the record.

Second track ‘LA Calling’ is one of the album’s picks. Following on from ‘Wave’, an acoustic guitar and a sing-along chorus deliver another bright indie-pop anthem. With chorus lyrics “LA Calling, bathed in sunlight” it is a song which makes you want find a barbecue or beer garden and spend a day in the sun.

It’s clear that the band have thought about their sound, and ‘Bridge Of Bones’ gives something completely different. Namely a piano, an acoustic guitar and a bunch of easy to listen to melodies. The instruments create a stripped back song that it as close to a ballad as the album gets. But as the sixth-track on the album, there is a feeling that it might have been wiser to mix things up earlier.

Only ‘Seperator’ and ‘Are We One’ would really fit on ‘Star Of Love’. The tracks, which are fourth and eighth respectively, provide a refreshing return to the quirky synth driven electronic sound that defined the band’s debut. But on a record that is all about progression the tracks seem a little at odds overall.

Spacey closer ‘Everywhere’ perhaps sums up the band’s shift. Halfway between electronic and indie folk, it stands alone as a good song but does not quite fit into the album as a whole.

The band have worked hard to progress their sound whilst delivering upbeat and memorable songs, perhaps at the cost of continuity – but some may call that the type of variation that so many albums lack. There’s no ignoring the fact that ‘Cave Rave’ is an album that offers something for most music fans to enjoy.