‘Positive Euth’ is the follow up album to Death Valley High’s award-winning second album ‘Doom, In Full Bloom’, and is an “evolution” as admitted by the band. DVH want to breach the boundaries of conventional music genres and “move from an uncategorised rock status into an uncategorised movement”. So how successfully does ‘Positive Euth’ accomplish this? 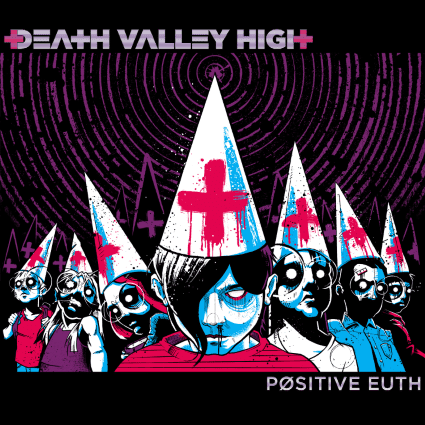 Opening with the banger ‘Bath Salt Party’, DVH show us their plans for the album with a rolling, roaring bass track accompanied by pounding drums, it managed to raise the heart rate and get me hyped for the album in just over a short-but-sweet minute.

Unfortunately, this hype doesn’t quite breach the waves and come to a head. This is not to say ‘Positive Euth’ is disappointing, because it’s not in the slightest – songs such as ‘How2Kill’, ‘Commit To Knife’ and ‘Fingernail Marks’ get the heart beating and the adrenaline flowing, smashing out exciting and very tight riffs that literally had me stomping my foot and grinning from ear to ear. The band members are all technically superb, gelling well towards a great modern alternative rock sound.

The addition of electronic sound effects and beats into their songs is definitely welcome; it adds a whole new dimension to the music, bringing back memories of InnerPartySystem. The guitarist is very original in his playing; many of the riffs are odd – in a good way – wailing over the rest of the track. Again, there is nothing wrong with the album as a whole. It has good sound, technically brilliant music, clearly coming from a band who loves to make it. So where does it go wrong?

There are these little niggling moments. A songs tend to drag or seem out of place. A prime example of this is ‘Cinema Verité’, which, with cliché and sickly lyrics such as “On the outside with no way in” and “We will never break apart / The world will never become dark” feels like an unwelcome, faux-deep break in the speed and adrenaline. Similarly, ‘A Little Light Conversation’ falls into sluggish tones which fail to go anywhere exciting. The issue here is not with the album, because as a whole the music comes furiously and brilliantly. The problem occurs when there are these slow, unenthusiastic numbers – clearly meant to be a trip into different genres – which disturb the flow of the record.

Overall, ‘Positive Euth’ is a decent record; Death Valley High have certainly come a long way from their roots, and their experimentation in electronic music is certainly a bonus. This album had a lot of potential as a booming summer mosh anthem, which through various factors has been muted, leaving us with a feeling that there could have been more. Death Valley High are going places, they just need to remove some of the speed bumps and the road ahead will be very smooth.