So the question has to be asked on the arrival of the new Deftones album as to what place it could possibly hold amongst a back-catalogue of seven? With the ‘White Pony’ legacy and ‘Diamond Eyes’ receiving notorious acclaim it is a well known fact that where success is found, there follows some expectation. 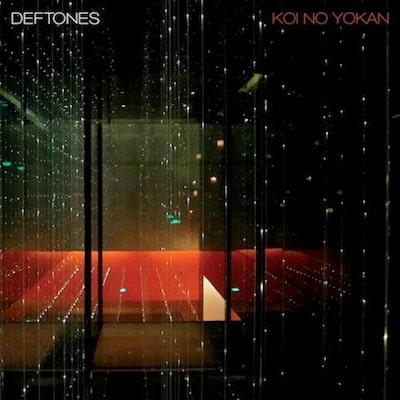 ‘Koi No Yokan’ is the Japanese phrase to explain the sense of love at first sight, perhaps not the actual feelings of love but rather, the expectations that run deeper than that – of a love that will be unrivalled by any other. Perhaps apt then that the first-listen-feelings evoked is one of love at first listen and a knowledge that this passion is only going to grow with time.

‘Swerve City’ provides the perfect album opener, a grunge-esque track complete with an imploding sense of confidence. The complexity can be found in its simplicity, Chino Moreno’s versatile vocals perfectly complimented by a dancing with death melodic bass line provided by stand-in bassist Sergio Vega.

‘Romantic Dreams’ and Leathers’ add a heaviness of cinematic proportion to the proceedings. Explosive production with ebbing choruses and crushing verses offer a natural flow of fierce riffs and soothing melodies. Both tracks are atmospheric and near-ethereal, with Stephen Carpenter’s eight strings suggestive of nervousness and an impending danger. ‘Leathers’ is indicative of that definitive Deftones sound with aggression and power built up through vocals which kick the listener in the face whilst the drums forcefully sucker-punch you in the chest.

‘Entombed’ is an album highlight with Frank Delgado on the turntables holding a heavy hand of power pushing out thought-provoking samples to transport you to a dream-like state. Chino’s hypnotic hushed vocals are supported by that heart-beat percussion Cunningham is renowned for. Chino’s vocal development is further realised in ‘Tempest’ wherein you can hear a simple shudder in his voice, a soaring seething aggression and an all out ferociousness which drags you deeper into the song until a lingering echo of distortion is all that is left.

A seven-minute epic in a post-rock vein can be found in ‘Rosemary’ complete with heavenly synths, twisting and twirling guitars and fronted with near angelic vocals. A slow and intimate dance until the percussion takes over and throws itself full force at your very being, see if you can stay standing! Perhaps some of the most beautiful guitar sounds can be found in the outro bending and floating the song to its close.

The whole album is a kaleidoscopic journey of epic proportions feeling both ambitious yet succeeding. ‘Koi No Yokan’ is a dynamic venture mixing the aggressive with a heady ambiance; this is its cohesive beauty. It is demanding of your full attention, weaving its wonderment in delicate threads over your auricular senses. You could say it lives up to expectation.