It would be an easy mistake to make thinking that all of this EP would feel overly repetitive due to the same base track being used for all the remixes, but each offering has its own unique way of simultaneously chilling and exciting the listener. This effect alone would be a clear indicator that Feral Five are going to blow your mind (and hopefully stick around to repeat). 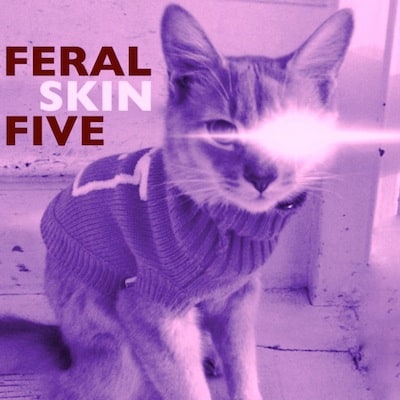 The original track ‘Skin’ by Feral Five shows the unlikely musical relationship between band members Drew and Kat Five (lovely names); but it works. Well. ‘Skin’ has all the factors needed to make a statement that will be heard. Influences from this track appears to include punk’s energy with the thrown out heavy music (with emphasis on the base and guitar). Kat’s enticing vocals wrap the whole song up in a way that means choosing just one genre for this track to fit into would prove difficult. One clear message that we get from ‘Skin’: Feral Five are here to get noticed, and they’re doing a great job of it.

The first remix we hear on Feral Five’s new EP is ‘Skin – Kissinger Space Dub Mix’, it really brings together a clearly dub vibe with Kat’s eerie vocals. The song is put across in a way that can only be imagined by visualising each component of the song floating above each other, vocals on top.

Next up, we’ve got ‘The Sick Mix’ and that is how we are introduced to The Woodentops’ Rolo McGinty and his work with Feral Five, and we have to say it is quite an introduction! ‘Skin Sick Mix’ is a very instrumental track, including a lot of experimental, overlapping beats. The upbeat track seems to have electrohouse and trance influences and it would be rude not to take note of the effectively chosen samples from the original track – good work.

Following, we have the ‘Skin Deep Mix’ and that instantly brings up a feel good vibe with its hard hitting intro. In turn this also gently allows Rolo McGinty to add a subtle beat underneath the lyrics creating a surround-sound feel. Due to our intense love for Kat’s voice and its ability to both sooth and unnerve, it would not have been hard to guess that this track would be our favorite on the EP as it contains the most vocals. We also cannot ignore how the song sounds so natural due to the smooth flow and the relationship between the added rhythm and the vocals. Finally, ‘Rolo McGinty’s Club Mix’ has ace beats which are not only catchy but have the effect of involuntarily making you tap your feet in time. The hypnotic feel to this version of ‘Skin’ means that we were are lost, and have to remind ourselves where we are when this track confidently concludes the EP.