Now, we’ve heard the term “coming through slaughter” – when Syd Barrett left Pink Floyd in 1968, they spent years fumbling around, searching for a direction before focusing their craft on ‘The Dark Side Of The Moon’. 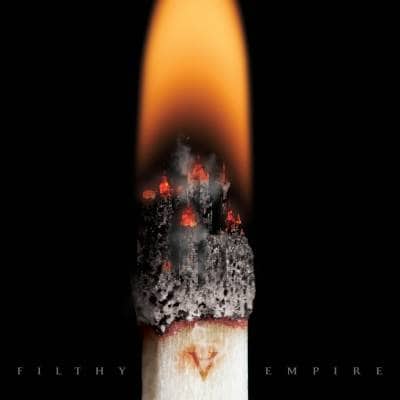 Okay, that was an ostentatious example, but the point is valid; a band that changed its stripes following line-up changes and eluded success yet continued where others floundered. ‘Filthy Empire’ is Heaven’s Basement’s full-length debut, yet the roots of this band can be traced back a full ten years. Emerging in 2003 under the moniker Hurricane Party, prompting a name change to Roadstar following the New Orleans disaster, these boys played classic British rock with a capital “C”.

Boasting a wealth of tousled rock locks and a flamboyant front man in Richie Hevanz, things looked promising for Roadstar. The Kevin Shirley-produced ‘Grand Hotel’ won them the coveted 2006 ‘Best Newcomer’ award in Classic Rock, beating the hotly-tipped Australian trio Wolfmother. As career positioning, it seemed perfect. Supporting the likes of Thunder, Deep Purple and The Darkness, penning songs under the tutelage of manager Laurie Mansworth, it was a giddy trip. Sadly, it all crumbled as Mansworth and the band parted company. In 2008, Heaven’s Basement was born, featuring a handful of Roadstar members, along with guitarist Sid Glover.

After a pair of well-reviewed, commercially-ignored EPs and numerous line-up changes, ‘Filthy Empire’ is the sound of men on a mission – chips on both shoulders, heads full of steam – aiming for the rock n roll high road. Producer John Feldmann [Papa Roach, Black Veil Brides] has done a wonderful job in turning the band’s boozy, brash live performances into an immediate, highly listenable record. The instruments wrestle for the foreground, yet all sound like they belong there; often threatening to tear holes in your speaker cones and come straight for your jugular.

‘Welcome Home’ wastes no time in ripping off its shirt and getting down to business. Buzzing like some Sunset Strip girl-chaser, it is as strong an opener as we have heard this side of ‘Appetite For Destruction’. New boy Aaron Buchanan’s pipes are given a serious workout, and if the token “muthaf***aaaa” turns the stomach a bit, it doesn’t hang around to cause any lasting damage. In second song ‘Fire, Fire’, the band hits its stride with a crushing riff that shakes its tush like Aerosmith without the make-up – mixing interesting dynamic shifts with a winning chorus, it is a real high point. As the wah-wah-soaked guitar solo and brief stop-time passage collapse into the final phases, between the hair-flailing you really do appreciate the subtleties Heaven’s Basement are capable of.

Conversely, single ‘Nothing Else To Lose’ sounds, despite its swagger, a little syrupy for our tastes. Cloying lyrics – “we are defiance” “we stand alone”­ – and the suitably “epic” unison lines veer dangerously close to the kind of FM radio rock already trodden to death by Nickelback et al. Fortunately at a trim three and a half minutes, the overall effect is rousing rather than toe-curling. ‘The Long Goodbye’ and ‘Be Somebody’ tread similarly thin ice, saved by their stadium-sized riffs and creative percussion.

Things take a slightly darker turn with ‘When The Lights Go Down In London’. Beginning on a dusty highway in the Deep South, its plaintive intro and verses is a welcome breather after the last three tracks, allowing guitarist Sid Glover to indulge his bluesy side and deliver a superb wall-of-sound solo. Elsewhere, ‘The Price We Pay’ showcases the band’s softer side. Replete with piano flourishes and a genuinely moving vocal line, this stripped-bare ballad is the record’s real surprise: it doesn’t feel like the “requisite slow one” found on so many rock records – it belongs here, standing as a singular achievement. We round things out with ‘Executioner’s Day’ – a song originally recorded four years ago with previous singer Richie Hevanz – an early fan favourite; it is a strong song considering its lack of sonic diversity, but does not quite match the 2009 EP version.

All in all, ‘Filthy Empire’ covers a lot of ground, and there is a satisfying tension between their thoroughly British grit and obvious transatlantic influences. Where the FM rock clichés rear their heads, a massive riff creeps up and bites them on the back of the neck before too many “woah woahs” ensue. They may have lost the melodic boogie of their previous guise, but are now in possession of an exuberance honed only through determination and years of hard work; Heaven’s Basement sound vital, alive and on occasion, brilliant.